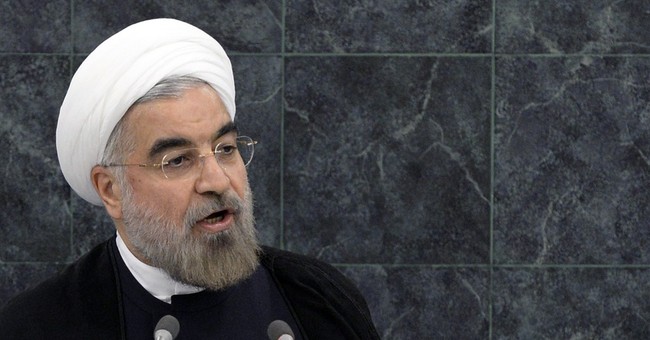 Before commenting on the budget battle in Congress that could potentially lead to a government shutdown next week, President Obama began his press conference today with a focus on foreign policy, confirming to reporters he spoke with Iranian President Hassad Rouhani on the issue of nuclear arms. It was the first time in over 30 years a United States and Iranian President have communicated.

"I believe we can reach a comprehensive solution," Obama said. "We're mindful of all the challenges ahead. The very fact that this was the first communication between an American and Iranian president since 1979 underscores the deep mistrust between our countries, but it also indicates the prospect of moving beyond that difficult history. I do believe that there is a basis for a resolution."

Last week, Rouhani wrote an op-ed in The Washington Post expressing his desire for constructive engagement, which many considered to be a gesture of goodwill toward the United States. More recently, the Iranian leader told NBC’s Ann Curry his country will never develop nuclear weapons.

Time will tell if Rouhani means what he says. The fact that he and President Obama actually spoke on the phone today is perhaps a good sign that our two countries are at least willing to speak to one another. Negotiating and reaching a compromise, however, is a whole other issue.

Oregon May Actually Make Its Mask Mandate Permanent
Rebecca Downs
Chris Cuomo Has Been Fired, And Supposedly Even More Information Has Come Out
Rebecca Downs
Even More Key Democrats Are Getting Caught Up Engaging in Mask Hypocrisy
Rebecca Downs