Obama Has Called the GOP's Bluff. What Will the House Do Next? 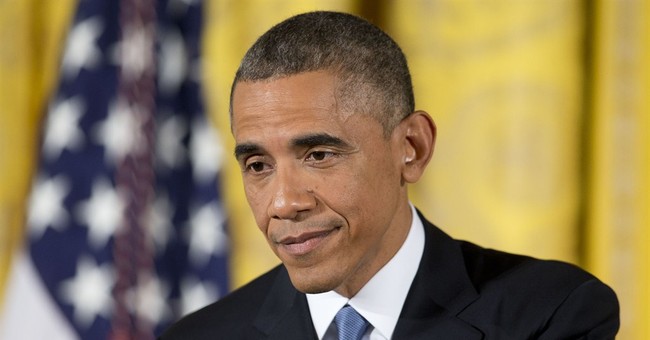 If you were looking for any acknowledgment from President Obama that he bears any responsibility for the massacre Democrats suffered at the polls on Tuesday, then you were probably very disappointed in his press conference yesterday.

Asked point blank by the Associated Press if, "you feel any responsibility to recalibrate your agenda for the next two years?" Obama replied, "I’m the guy who’s elected by everybody, not just from a particular state or a particular district."

In other words, "I was elected by Blue State America two years ago. They are the people I am accountable to. The Red State peons that voted yesterday are irrelevant to me. I don't care what they think."

To drive this point home, Obama doubled down on his plan to enact an unprecedented amnesty by executive fiat:

I have said before that I actually believe that John Boehner is sincere about wanting to get immigration reform passed, which is why for a year I held off taking any action beyond what we’d already done for the so-called DREAM kids, and did everything I could to give him space and room to get something done.

And what I also said at the time was, if, in fact Congress -- if this Congress could not get something done, then I would take further executive actions in order to make the system work better, understanding that any bill that they pass will supplant the executive actions that I take.

Let's leave aside for a second Obama's lie about amnesty enabling the federal government to better allocate enforcement resources. As we've covered before, amnesties are expensive and actually degrade current enforcement capabilities.

The more pressing point for now is Obama's claim that House Republicans should pass an amnesty bill that Obama likes soon that would then "supplant" whatever executive actions Obama takes. This is another huge lie.

So since the legal basis of Obama's executive amnesties is constitutional, and not legislative, there is no bill Republicans can pass that would "supplant" or "supersede" Obama's lawless decision to invent new immigration law. Obama has already demonstrated he does not have the will or the capacity to faithfully execute current immigration law and his unwavering determination to expand his lawless amnesty programs, in the face of electoral rebuke, shows he will never have that ability.

Obama essentially called the Republicans bluff yesterday. He has flat out told them he is going to go ahead with his executive amnesty no mater what they do, and if they feel like it, they can rubber stamp it after he is done.

If Republicans let Obama get away with this they are essentially repudiating any mandate they received from their own voters Tuesday. Obama would then be emboldened to ignore Congress on everything from Iran, to Obamacare, to energy policy.

The only thing Republicans can do now is use the power of the purse to constrain Obama's executive power. They must pass an appropriations bill that specifically denies all funding for issuing work permits and other documents to any illegal alien seeking prosecutorial discretion. Or limit the number of permits issued to something in line with historical norms.

House Republicans don't have to pass such a bill right away. It is probably wiser for them to quickly pass a short-term continuing resolution in the lame-duck and then comeback to fight again in January when they have a Republican Senate to fight with them.

But if they don't fight, if House Republicans pass a long-term CR in the lame duck that enables Obama to walk all over them on everything, it will be a complete betrayal of the voters that just gave them their largest majority in history.