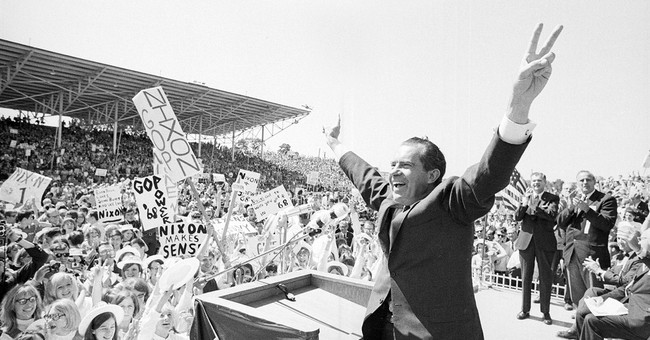 Congratulations Mr. Weiner on your new book, One Man Against the World: The Tragedy of Richard Nixon! Can you give us an overview of your book, and what was your inspiration in writing it?

Richard Nixon was my president—he was first elected when I was twelve and he resigned when I was eighteen. He shaped my thinking about American power and American politics.

In February 2013, I was at the Nixon Presidential Library giving a speech about his personal and political relationship with America’s other leading anticommunist, J. Edgar Hoover. Afterward, I learned that the last cache of Nixon’s secrets—hundreds of hours of White House tapes and many thousands of documents—would be released by the end of 2014. I discovered that a great deal of top-secret material from the Nixon years also was being declassified by the Pentagon, the State Department, and other national-security agencies. I determined that I would pounce on this material.

These newly declassified documents add a great deal to the Nixon story—they are like the fourth and fifth acts of a Shakespearean tragedy.

Ultimately, how will (or should) historians view Nixon – the good, and the bad?

Nixon was perhaps the greatest political genius of his time. His comeback after his devastatingly narrow loss to JFK in 1960 was noteworthy by any standard, yet he threw it all away. He remains the only president ever to resign in disgrace.

Only in hindsight, through the newly revealed documentation, does it become clear how he committed political suicide. Richard Nixon trusted no one—not his Cabinet, not Congress, not the Joint Chiefs of Staff, and certainly not the American citizenry—and the mistrust became mutual.

In relation to the conservative movement, what do you think is Nixon’s legacy?

Yet some conservative thinkers of Nixon’s era—notably William F. Buckley—remained unconvinced of Nixon’s bona fides as a man of the right. And of course these same leaders felt betrayed when Nixon pursued policies that ultimately led to a loss in Vietnam and his presidency.

What was something interesting about Nixon you learned about when researching and writing your book that the general public may not know (good and bad!)?

Nixon suffered terrible insomnia, and he treated it with alcohol—a bad idea. Many of the newly released tapes record drunken midnight tirades with Secretary of State Bill Rogers and White House Chief of Staff Alexander Haig. These are terrifying recordings. The president is raging, raving, not in his right mind—and wars, crises, and existential confrontations faced him come the dawn.

I was a newspaperman for many years, covering the CIA in Washington and reporting on war and conflict in garden spots like Afghanistan, Pakistan, Sudan, and Liberia. Given that the newspaper was The New York Times, many CBC readers may be skeptical that any conservatives have influenced me. But they have and they do.

President Eisenhower grows in my estimation with every passing day. I will always admire the work of William F. Buckley for his style and his sensibility. And—I can’t help myself—I love reading Justice Antonin Scalia’s opinions for his wit, his intellect, and his sense of outrage.