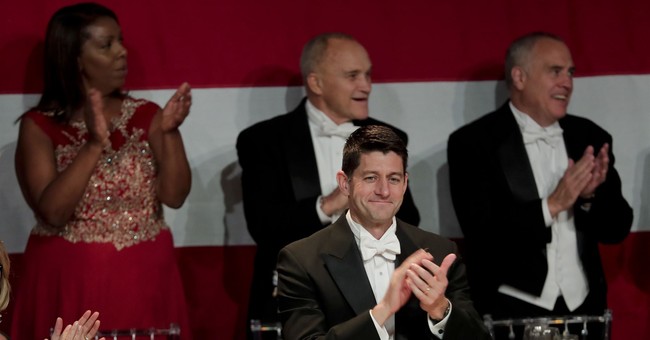 Last night was the annual Al Smith Dinner, which traditionally features the keynote speaker or speakers doing a roast of the current political climate. This year's speaker was Speaker of the House Paul Ryan (R-WI), who did not hold back in his jabs at President Trump, Sen. Chuck Schumer, the media, and many others.

Watch some of the highlights from the event:

Some of his jokes included:

“You know what I find amazing about this...I don’t think I’ve seen this many New York liberals, this many Wall Street CEOs in one room since my last visit to the White House.”

"I know last year that Donald Trump offended some people. [...] Some said it was unbecoming of a public figure, and some said his comments were offensive. Well, thank God he's learned his lesson."

"Look at all the new jobs the president has created...just among the White House staff!"

“What’s it like to work on a daily basis with an abrasive New Yorker with a loudmouth? But you know, once you get to know him, Chuck Schumer's not that bad!”

"Given the current investigations, I too can see Russia from the House."

"When people ask me if I believe everything I see on Facebook, I say 'nyet.'"

The Al Smith Dinner raises money to help out disadvantaged children in the Archdiocese of New York. It is named after Alfred E. Smith, the first Catholic to be a major party's nominee for president. As it is held each year during the third Thursday of October, every four years it is one of the last places the two presidential nominees are seen together.