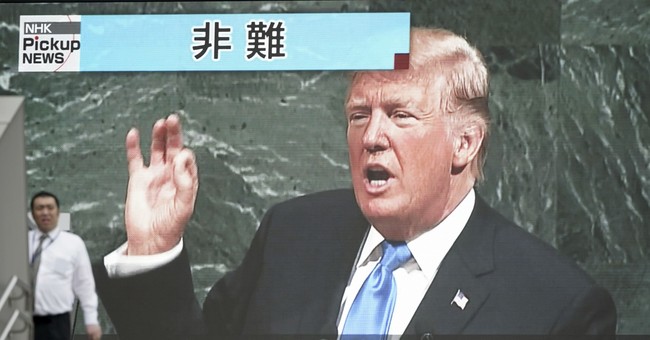 While some world leaders applauded President Trump's speech at the United Nations on Tuesday, one country was pretty miffed: China. In an editorial published in the English version of China's "People's Daily" newspaper, China accused trump of threatening North Korea with "Total Destruction" compared to China's apparent wish for peace in the region. China does not have a free press.

In the editorial, titled "Trump threatens DPRK with 'Total Destruction' while China cals for peaceful settlement," Trump is described as engaging in "political chest-thumping" that is only serving to egg on North Korea to develop even more missiles. The U.S. is called "irresponsible" and accuses Trump of playing a game of "chicken" with North Korea.

Trump's political chest-thumping is unhelpful, and it will only push the DPRK to pursue even riskier polices, because the survival of the regime is at stake. It is time for the US to realize that irresponsible words and actions are backing the DPRK into a corner with no way out, and it would be a tragedy if Trump’s risky game of chicken with the DPRK crosses the point of no return.

The fact that the situation on the Korean Peninsula has gone from bad to worse shows that the US has failed to play its role as a responsible major country. Rather than throw more fuel on the fire and pressure China to defang the DPRK for its own selfish interests, the US should use its great power and influence to do more to break the spiral of escalation and engage the DPRK in dialogue.

In this author's opinion, China's relationship with North Kore is far more "unhelpful" than Trump's speech.

China's suggestion to use dialogue to deal with North Korea has been tried again and again, and it's simply not going to work. Something has to be done to deal with the situation, and talking it out isn't doing anything to stop the production of missiles.