U.S. To Give $32 Million To Aid the Rohingya 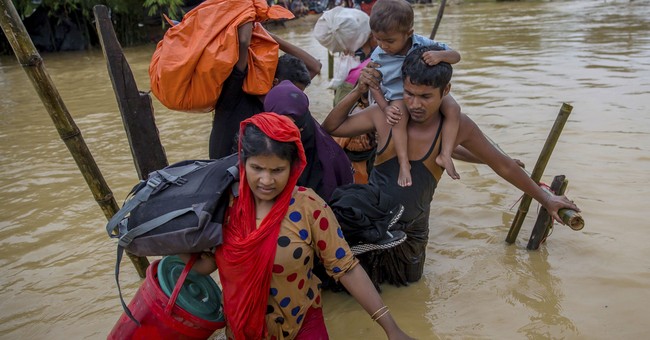 The United States is going to give $32 million in humanitarian aid to assist with the Rohingya refugee crisis, the State Department announced on Wednesday. Over 400,000 members of Myanmar's Rohingya ethnic minority have fled the country into Bangladesh in recent weeks due to what is being described as ethnic cleansing by the country's army. This is the first comment the U.S. has made about the plight of the Rohingya.

The State Department said that the money will be used for emergency shelter, food assistance, water, and crisis reduction, among other things.

The United States is providing an additional nearly $32 million in humanitarian assistance to address the urgent needs of Rohingya fleeing violence from Rakhine State, Burma to Bangladesh, as well as internally displaced persons in Rakhine State, and host communities in Bangladesh. The United States is pleased to have announced this support during the 72nd Session of the UN General Assembly in New York. Among other priorities, one of the primary themes of this year’s General Assembly is bolstering support for humanitarian assistance to ongoing emergencies, in particular for refugees and the communities that host them.

The new funding brings U.S. humanitarian assistance to internally displaced persons in Burma and refugees from Burma in the region to nearly $95 million in FY 2017, and it reflects the U.S. commitment to help address the unprecedented magnitude of suffering and urgent humanitarian needs of the Rohingya people. We applaud the Government of Bangladesh’s generosity in responding to this severe humanitarian crisis and appreciate their continued efforts to ensure assistance reaches people in need.

Myanmar's First Counsellor Aung San Suu Kyi spoke with Secretary of State Rex Tillerson, who urged her to do something to combat the crisis. Suu Kyi has been heavily criticized for her relative inaction about the atrocity.