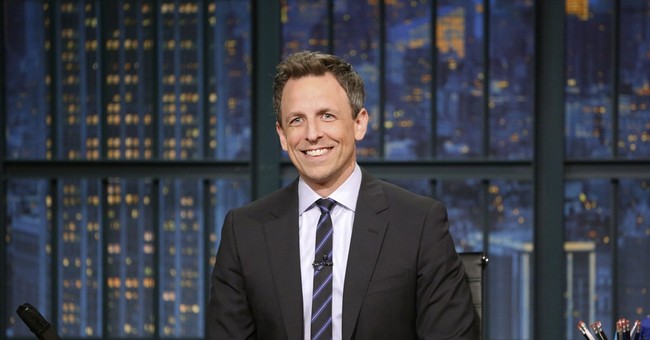 Seth Meyers, host of "Late Night with Seth Meyers," did not hold back in skewering Hillary Clinton over the content of her new book "What Happened." In the book, Clinton blamed Sen. Bernie Sanders (I-VT) for setting up the "crooked Hillary" narrative used by then-candidate Donald Trump, and said other negative things about Sanders campaign.

Meyers, having none of it, broke into a segment he called "Hey!" and proceeded to rip Clinton to shreds for trying to pin her loss on Sanders. Sanders, Meyers said, didn't tell Clinton to ignore key states, as well as to make cringe-worthy jokes. Meyers also emphasized that Clinton received three million more votes than Trump, and said that she should be blaming the Electoral College more than anything else for why she's not president.

I mean, Meyers isn't wrong, and Clinton doesn't exactly come off looking all too great in this book. Her campaign was flawed and she was hardly an ideal candidate. It's still somewhat astounding she managed to lose to Trump--talk about snatching defeat from the jaws of victory.

Meyers was hardly the only late-night host ripping on Clinton--Stephen Colbert suggested an equally plausible book title to "What Happened"--mocking how she had already planned a victory party, complete with fireworks.

Leaks are leaking out from Hillary Clinton's book and they are spicy. #LSSC https://t.co/zPeXnQk85C pic.twitter.com/RfNzffhbZL

"What Happened" officially is released on September 12.

Share this on Facebook
Tweet
It's Over: Senate Republicans Defeat Corrupt 'For the People Act'
Reagan McCarthy
Escape from New York: WSJ Hopes for City's Revival, But Zeroes in on the Candidate Who Must Lose At All Costs
Matt Vespa