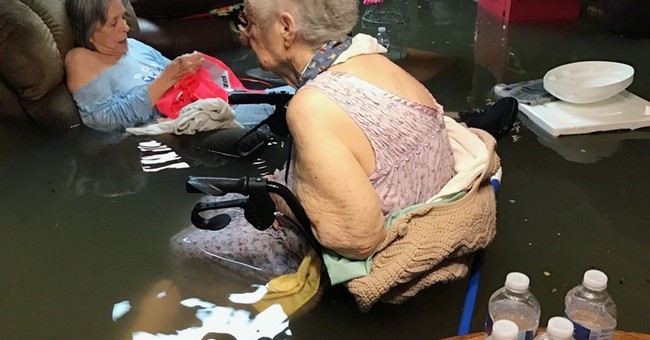 One of the more distressing images to come out of Hurricane Harvey's destruction was a scene from La Vita Bella Nursing Home in Dickinson, TX, where elderly residents were seen calmly lounging in waist-deep floodwaters in what appeared to be a living room.

The heart-wrenching picture quickly went viral, and was shared thousands of times on social media platforms.

However, there's a happy update to this story: the residents in the picture were safely evacuated from the nursing home, and are now happy and dry. The Instagram page of "CBS This Morning" shared a picture of the women on their official Instagram page. They were evacuated to Allen, Texas.

(Nobody has commented on what happened to the cat in the original photo, but we're hoping he's okay too.)

According to the New York Times, originally the residents were told to stay put and not evacuate, but when the floods came, things obviously had to change. Galveston County officials say that they were aware of the situation in the nursing home before the picture went viral.

What a relief. While the nursing home has clearly suffered extensive damage, at least everyone is safe--which is the most important thing.