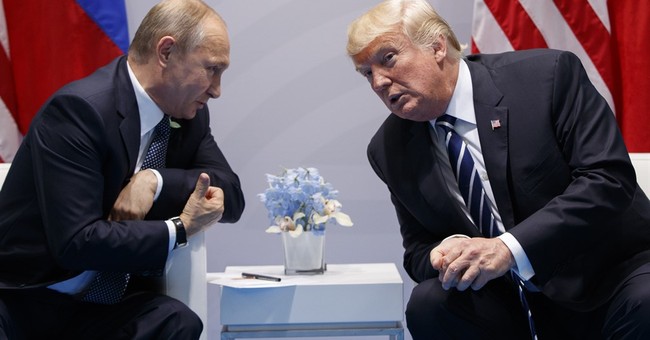 UPDATE: Trump administration officials are already denying the Russian foreign minister's statement that President Trump "accepted" Putin's assurance that Russia did not meddle with the election.

President Donald Trump met with Russian President Vladimir Putin on Friday in Hamburg, Germany. The two were attending the G20 Summit. The two met for just over two hours.

The meeting between President Donald Trump & Russian President Vladimir Putin is over, per official. It ran for roughly 2 hours & 16 min.

Trump apparently jumped right in to talk about the elephant in the room: Russian meddling with the 2016 election. Per reports from Secretary of State Rex Tillerson, it was the first thing that Trump addressed in the meeting.

Putin then denied every allegation that Russia did any sort of interference in the election.

Wow. Tillerson says that @potus *opened the meeting* talking about Russian interference in the election.

According to Russia's Foreign Minister Sergei Lavrov, Trump  "accepted" these claims that Russia did not do anything with the American election.

Other topics discussed at the meeting include Syria, Ukraine, terrorism, and cybersecurity. Russia and the United States will set up a joint working group on cybersecurity.

The two leaders apparently got along quite well with "positive chemistry" between them.