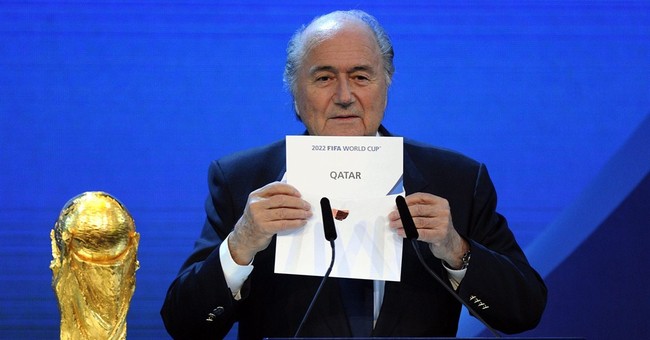 In December of 2010, FIFA awarded the 2022 World Cup bid to Qatar, a small nation the size of Connecticut bordering Saudi Arabia. Qatar's bid beat out bids from the United States, Australia, South Korea, and Japan, and has been dogged by accusations of bribery, a worrisome death rate for foreign workers living in squalid conditions, as well as logistical questions regarding hosting a summer tournament in 120-degree heat in stadiums boasting technology that doesn't exist. Anyhow, severe corruption and worker exploitation aside, today Qatari officials raised eyebrows when they effectively said that gays would not be permitted to attend the event. Homosexual sex is illegal in Qatar.

Asked how gay people will be welcomed in 2022, Salah bin Ghanem bin Nasser al-Ali replied: "It's exactly like the alcohol question."

He said Qatar doesn't want to create "this impression, illusion that we don't care about our tradition and our ethical values ... We are studying all these issues. We can adapt, we can be creative to have people coming and enjoying the games without losing the essence of our culture and respecting the preference of the people coming here. I think there is a lot we can do."

The reference to the "alcohol question" was his reply on whether beer sales will be allowed at stadiums in the country where alcohol is severely restricted. "In the hotels and many areas we have alcohol but we have also our own system that people need to respect," he told AP. "As we bid for 2022, we will respect all the rules and regulations by FIFA. We can study this and minimize the impact on our people and tradition. I think we can be creative, finding solutions for all of this. But we respect all the rules and regulations."

Firstly, the fact that alcohol sales at the largest international sporting event are "a question" (additionally, Budweiser is a huge sponsor of the World Cup) should have been enough of a red flag for FIFA's voters during the bid-process. Secondly, a sports minister of a country in the 21st century just compared beer sales to not persecuting homosexuals who dare to enter his country. Unbelievable. FIFA President Sepp Blatter joked in 2010 that gay fans should simply avoid having sex at the 2022 World Cup, but it appears his joke was actually prophetic.

FIFA should be ashamed of themselves for awarding a World Cup bid to a country that even FIFA officials admit is clearly unprepared to host the event.

There is, of course, an easy solution to the myriad problems associated with Qatar: Host the event in the United States. The United States, the runners-up for the 2022 World Cup bid, hosted the 1994 World Cup—the most profitable and best-attended World Cup ever. To anyone not belonging to a corrupt and morally bankrupt sports governing organization, you'd think it'd be an easy choice: hey, let's award the event to a country that won't need to import slave labor to build the stadiums. But no, apparently bribes of petrodollars spoke louder than common sense and logic. Disgusting.

I'll let HBO's John Oliver sum up the rest of my feelings about FIFA (Warning, NSFW-language):