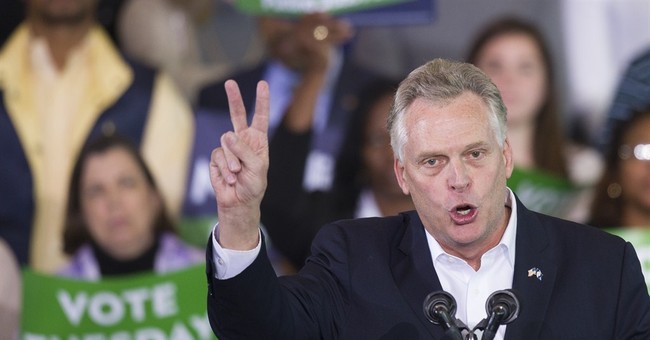 Fahrenheit 9/11, an Academy Award-winning film by Michael Moore, is notable for its support of numerous conspiracy theories related to the September 11, 2001 terrorist attacks. Theories postulated by Moore include that the War in Afghanistan was not started to decimate the Taliban and those who supported Al Qaeda, but rather to benefit oil companies in Texas. In 2004, Terry McAuliffe—the current Democratic candidate for governor of Virginia—who was at that time the chairman of the Democratic National Committee, attended a screening of the film in Washington, DC. His reaction to the film? He loved it.

McAuliffe called the film "very powerful, much more powerful than I thought it would be." When asked by National Review Online if he believed Moore's account of the war in Afghanistan, McAuliffe said, "I believe it after seeing that." The DNC chairman added that he had not heard of the idea before seeing the movie, but said he would "check it out myself and look at it, but there are a lot of interesting facts that he [Moore] brought out today that none of us knew about."

The Trans-Afghanistan Pipeline, which has been in planning since 1995, has not yet been built.

While McAuliffe made his comments nearly a decade ago, they're still online and easily accessible via Google search. I have an odd feeling that if a conservative candidate had made similar comments they would not have been forgotten this quickly.

Do Virginians really want a conspiracy theorist as their governor?