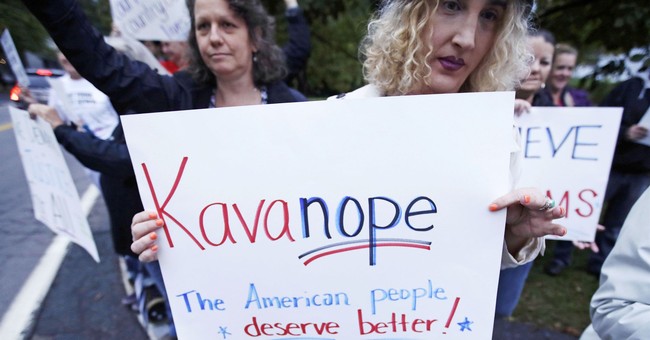 On the same day that Brett Kavanaugh was confirmed and sworn in as a justice on the U.S. Supreme Court, The New York Times’s editorial board decided to publish an article arguing that the white women who supported him are “gender traitors” who have formed a “blood pact” with the “patriarchy” in order to “reproduce whiteness” in “the [demographic] war…with non-white people” and “minimize violence against their own bodies.”

The opinion piece —titled “White Women, Come Get Your People” —was written by public relations consultant Alexis Grenell. Using all the wisdom gained from her work in PR, Grenell opened her diatribe against white women by characterizing the women who were then flooding the Capitol to protest Kavanaugh’s nomination as being so psychologically disturbed that they were on the edge of committing suicide to make their political point [emphasis throughout mine]:

After a confirmation process where women all but slit their wrists, letting their stories of sexual trauma run like rivers of blood through the Capitol, the Senate still voted to confirm Judge Brett M. Kavanaugh to the Supreme Court. With the exception of Senator Lisa Murkowski of Alaska, all the women in the Republican conference caved, including Senator Susan Collins of Maine, who held out until the bitter end.

Instead of recommending psychotherapy or medication for the women experiencing such harmful emotions, Grenell continued by excoriating senators like Susan Collins for not caving in to the mentally disturbed protestors’ demands, labelling her and all female GOP senators who supported Kavanaugh as “gender traitors”:

These women are gender traitors, to borrow a term from the dystopian TV series “The Handmaid’s Tale.” They’ve made standing by the patriarchy a full-time job. The women who support them show up at the Capitol wearing “Women for Kavanaugh” T-shirts, but also probably tell their daughters to put on less revealing clothes when they go out.

After portraying Senator Lindsey Graham as a monster for telling a female protestor who claimed to be a victim of rape to report the crime to the police and mocking women who are concerned about false allegations against their male family members, Grenell turned towards the central thesis of her piece:

But the people who scare me the most are the mothers, sisters and wives of those young men, because my stupid uterus still holds out some insane hope of solidarity.

We’re talking about white women. The same 53 percent who put their racial privilege ahead of their second-class gender status in 2016 by voting to uphold a system that values only their whiteness, just as they have for decades.

Grenell did not provide evidence to support her claim that American society actively promotes white supremacist values or works to oppress racial minorities or women, merely taking the social justice narrative as a given. Because this assumption is critical to her analysis that white women who support Republicans are evil, this seems to be a major omission for a piece making such an extraordinary claim about an entire race/sex grouping.

After correctly noting that racial differences in political support tend to be much greater than those between men and women, Grenell then combined her social justice assumptions with this fact to come to the conclusion that white women are complicit in upholding the evils of the “patriarchy”:

The gender gap in politics is really a color line.

That’s because white women benefit from patriarchy by trading on their whiteness to monopolize resources for mutual gain. In return they’re placed on a pedestal to be “cherished and revered,” as Speaker Paul D. Ryan has said about women, but all the while denied basic rights.

Grenell did not list any “basic rights” that women do not possess in the United States. Instead, she proceeded by attacking Kellyanne Conway for claiming to be a victim of sexual assault and painted the White House advisor as a white supremacist deliberately waging a demographic war against “non-white people”:

Consider what Kellyanne Conway, a top adviser to the president, said at a dinner last year for New York’s Conservative Party. She suggested that higher birthrates are “how I think we fight these demographic wars moving forward.”The war, of course, is with non-white people.So it seems that whitewomen are expected to support the patriarchy by marrying within their racial group, reproducing whiteness and evenminimizing violence against their own bodies.

Recently, Ms. Conway even weaponizedher own alleged sexual assaultin service to her boss by discouraging women from feeling empathy with Christine Blasey Ford or anger at Judge Kavanaugh.

Grenell’s citation for Conway’s supposed white nationalist tendencies links to an older article from the Daily Beast (also written by Grenell) that provides no evidence for her racial interpretation of Conway’s comments but does go on at length about Grenell’s own obsession with “The Handmaid’s Tale” TV show while ranting about how terrible it is that Conway and Ivanka Trump are proud mothers.

While most white mothers might be surprised to find out that their mere existence as white women who are proud to have children makes them white nationalists, Grenell —apparently taking this “logic” for granted —did not skip a beat. In the next major part of her piece, she finally turned to #Science! for answers as to why white women are so nasty (namely, a single study by UCLA political scientist Lorrie Frasure-Yokley):

During the 2016 presidential election, did white women really vote with their whiteness in mind? Lorrie Frasure-Yokley, a political scientist at U.C.L.A., recently measured the effect of racial identity on white women’s willingness to support Trump in 2016 and found a positive and statistically significant relationship. So white women who voted for him did so to prop up their whiteness.

In the study, white women who agreed that “many women interpret innocent remarks or acts as sexist” were 17 percent more likely to vote for a Republican candidate. They were also likely to agree that “blacks should work their way up without special favors.”To be sure, women of color aren’t inherently less sexist or even without their own racial biases. But unlike white women, they can’t use race privilege to their advantage.

Given the current replication crisis in social sciences where anywhere from one to two thirds of studies cannot be reproduced by outside researchers (and that is within the relatively “hard” social science of psychology), it stands to reason that relying on a single social science survey to prove white women’s inherent evil is pretty insane, to say the least.

And yet, even if you assume that the results of Frasure-Yokley’s study were neither a fluke nor the result of any scientific malfeasance or error, the actual text of her paper does a great deal to undermine her conclusions by revealing how deeply Frasure-Yokley and other political scientists’ political and ideological biases influence their research.

As part of her study, Frasure-Yokley used a measure of “hostile sexism” that asked women if they agreed with the four following statements:

1) Women fail to appreciate what men do for them.

2) Many women interpret innocent remarks or acts as being sexist. (Cited above by Grenell)

3) Women seek to gain power by getting control over men.

4) Once a woman gets a man to commit to her, she tries to put him on a tight leash.

Regardless of any disagreement that you may have with the above statements, do you think that every woman who agrees to one of the above statements really qualifies as a “hostile sexist” who hates women and wants to discriminate against them(selves)? All of the statements, vague though some of them may be, seem to be empirical descriptions of average female behavior that can be either supported or refuted by other studies from psychologists and sociologists.

Furthermore, statement #2 (with which 38 percent of white women and 33 percent of women of color agreed) seems especially out of place here. Given the very existence of feminists —who nowadays see everything from men explaining things (“mansplaining”) to men sitting on buses and trains with too wide a stance (“manspreading”) as symptoms of sexism that must be eradicated —it seems undeniable that many women certainly do read sexist intent into relatively harmless (or completely normal) male behavior.

As for the other three statements, it seems strange to wholly deny that at least some women consciously manipulate men to get things they want, try to limit their husbands’ or boyfriends’ freedom of action, or are sometimes unappreciative of men’s hard work and labor. It would be odd indeed if women were so different from men that they never tried to control other people’s behavior (and what is necessarily wrong with that?) or behaved selfishly (as men of course can be prone to do).

Frasure-Yokley and Grenell’s insistence that agreeing with such statements is clear evidence of hatred of women thus ends up appearing to be a strange form of religious dogma holding as sacred and unquestionable that no number of women can ever be looked at in a critical light, even by other women. Regardless of how you want to label this kind of thinking, it is definitely not science, political or otherwise.

Due in part to Grenell’s unflinching faith in Frasure-Yokley’s study, the PR expert was convinced that white women must be acting together with white men as part of a “blood pact” to prop up the white supremacist American patriarchy:

This blood pact between white men and white womenis at issue in the November midterms. President Trump knows it, and at that Tuesday news conference, he signaled to white women to hold the line: “The people that have complained to me about it the most about what’s happening are women. Women are very angry,”he said. “I have men that don’t like it, but I have women that are incensed at what’s going on.”

I’m sure he does “have” them; game girls will defend their privilege to the death.

Of course, the more mundane explanation of Trump’s statement—namely that many women are truly upset about the shredding of Kavanaugh’s presumption of innocence and other legal due process norms —could not explain Trump’s comments, at least for Grenell.

To conclude her NYTpiece, Grenell mocked Senator Collins’s Friday speech supporting Kavanaugh as a “slow funeral dirge” that she “couldn’t even hear through [her] rage headache” and asked her white women readers to contemplate whether they wanted to be a Senator Murkowski or a Senator Collins in this November’s upcoming midterms.

“I fear we already know the answer,” Grenell opined, mercifully bringing her screed to an end.