Washington Post: Harassing White House Women Is ‘The Right Thing to Do’ 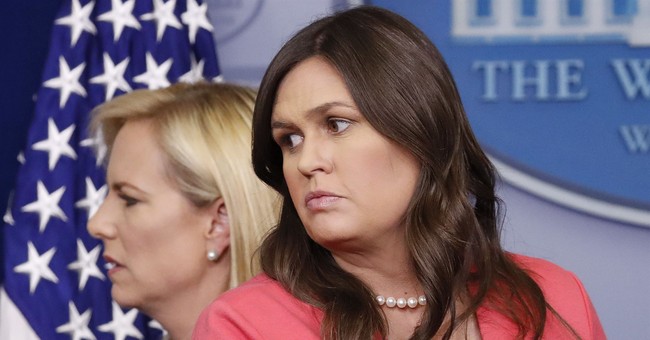 On Tuesday, The Washington Post published an opinion piece in which former Gawker writer Tom Scocca justified the recent instances of harassment and stalking of White House Press Secretary Sarah Huckabee Sanders and Homeland Security Secretary Kirstjen Nielsen as “the right thing to do” in light of the Trump administration’s policy of arresting criminal illegal aliens at the border.

The piece, bluntly titled “Chasing White House officials out of restaurants is the right thing to do,” was published as part of the Post’s “Post Everything” initiative. At the time of its launch in May 2014, “Post Everything” editor Adam Kushner described his section of one of the world’s most influential newspapers as a vehicle for broadening the horizons of its readers by giving them fresh and informative expert opinions on a wide range of topics.

So Post Everything…is an attempt to expand the conversation outward. Should we worry about the robot takeover of U.S. jobs? Ask an economist. What are some of the dumbest things people think about American foreign policy? Ask a political scientist. How do football teams draft prospects, what does it feel like to confess to atheism in a deeply religious place, is Russia really seeding Crimea with more Russian citizens, and how did university sexual-assault policies get to be so daft? Ask the people who are in a position to answer.

For an expert opinion on whether it is okay to scream at, stalk, and harass women in public for their politics, the Postturned to Scocca, whose main qualification for the task appears to be that he once wrote an essay for Gawker on “smarm.” (Yes, seriously.) Consequently, Scocca’s defense for intimidating Sanders and Nielsen does not come off as a well-thought-out piece of moral philosophy, but rather a series of ridiculous, snark-laden questions about why anyone should care about the harassment as long as the Trump administration enforces American immigration laws by arresting criminals at the border:

The political press and the establishment class have been alarmed and confused by a restaurant owner’s refusal to serve White House press secretary Sarah Huckabee Sanders this past weekend. Wasn’t this a betrayal of the basic norms that hold society together? Won’t it just offend and energize President Trump’s base going into the 2018 midterms? Doesn’t targeting Sanders — or Homeland Security Secretary Kirstjen Nielsen, who fled a Mexican restaurant last week after being confronted by chanting protesters — just mimic Trump’s own regrettable efforts to undermine civility?

A better question for the pundits, which might help clear things up for them, is this: What makes you think this is any of your business?

Children, some still in diapers, have been seized from their parents by the government and locked in cages, with no clear way to reunite them with their families afterward. That situation might seem more urgent, in itself, than the question of how people chose to react to the government seizing children and locking them in cages. Yet here we are, caught up in this fuss over — manners? Civility?

Scocca went on to reason out that both instances of harassment were justified because they were examples of private individuals expressing their political opposition to the Trump administration’s “extraordinary” law and order immigration policies and its attempts to bar transgender people from serving in the U.S. military:

What happened at the Red Hen in Lexington, Va., was not a contest between political parties, or between designated proxies of political parties. It was a private citizen telling a presidential administration official to go away, out of disgust with the fact that the administration is seizing children from their parents and locking them in cages and barring transgender people from military service. Likewise, the protesters who yelled at Nielsen were not aiming to be part of a normal political process, but to respond to extraordinary events with extraordinary actions.

At no point in Scocca’s rambling piece did he mention the fact that, according to Sarah Huckabee Sanders’s father and former Governor Mike Huckabee, Red Hen owner Stephanie Wilkinson did not just kick the Press Secretary and her family out of the restaurant, but actually followed some of Sanders’s family to another restaurant and harassed them there. Instead, Scocca disingenuously characterized Wilkinson’s unhinged and unprofessional conduct as the actions of an “ordinary,” “polite” citizen simply expressing herself through a laudable “act of conscience.”

Unsurprisingly then, Scocca concluded his piece with an impassioned call to his fellow liberals to abandon all calls for civility and to defend people who harass Republican women like Sanders and Nielsen. Scocca’s ultimate reasoning for this was that Americans on the political right cannot be reached by “appeals to decency”:

No appeal to decency can ever bring Trump and the Trumpists around. It is not possible to mollify a political cult that runs on outrage, and it’s not worth trying. People are moved to protest what they’re witnessing, and even in the most high-minded of times, there is no form of protest polite enough to be acceptable to the people and institutions being protested.

It is not any person’s duty to make life more comfortable for the White House press secretary, or for the head of Homeland Security, or for any of the other officials who conceived, carried out and defended the policy of tearing apart families. It is not a private citizen’s job to ask whether their revulsion and outrage have been correctly calibrated to fit party goals for the next two cycles, on the theory that the highest human calling is to be a successful campaign strategist. If pundits are worried about the relationship between manners and brutality, instead of asking whether people ought to be so rude to the administration, they might ask what they’ve accomplished by being polite.

After being called Nazis, fascists, and KKK-supporting genocidal maniacs who want to put people in concentration camps for the millionth time, perhaps conservatives should wonder what comes next if liberals stop being so polite in the future.

Scocca’s piece in the Post can be found at this link.