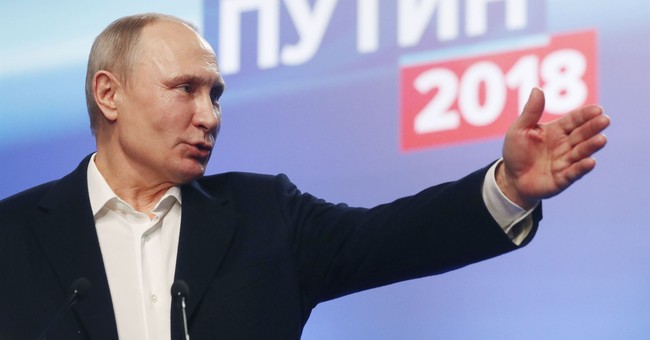 On Sunday, Vladimir Putin cruised to victory in Russia’s presidential elections with more than three quarters of the vote, easily beating the handful of contenders who stood in opposition.

With almost all districts reporting in and counted, Putin garnered about 76.7 percent of the total vote, the highest proportion in any presidential election since the dissolution of the Soviet Union.

Putin’s most popular challenger was the millionaire Pavel Grudinin, who won 11.8 percent of the vote while representing the Communist Party of the Russian Federation, Russia’s official successor to the Soviet Communist Party.

In third place was the ultranationalist leader of the LDPR (formerly known as the Liberal Democratic Party of Russia), Vladimir Zhirinovsky, who got 5.7 percent of the vote. Zhirinovsky’s party has previously run election ads demanding the return of the Soviet Union’s previous territories to Russian control.

In sum, Putin’s challengers only won a combined 22.3 percent of the vote.

Part of Putin’s massive victory is due to the fact that his most popular potential opponent was excluded from the race. Opposition leader and blogger Alexei Navalny, who has built a career around lambasting Putin and his political party United Russia as a gang of “crooks and thieves,” was barred from running in this past weekend’s election due to a 2017 re-conviction for embezzlement (a past conviction for the same crime had previously been overturned by Russia’s Supreme Court). In response to his candidacy filings being denied, Navalny called for his supporters to boycott the elections and hold protest rallies to raise awareness about his plight.

Seemingly in response to this boycott, Russian authorities’ main goal in Sunday’s election was not necessarily to secure Putin’s victory (that was seen as a given), but rather to push turnout as high as possible to make the elections appear legitimate, both at home and abroad. In this respect, Putin’s government appears to have succeeded, as Russia’s official Central Election Commission reported more than 67 percent voter turnout. This number was likely boosted by a concerted campaign organized by regional election commissions to offer free watches, iPhones, cars, concert tickets, and GoPro cameras (among other goodies) to those who came out to the polls.

Although allegations of voter fraud and ballot stuffing (including video evidence) have surfaced, Putin’s high approval ratings and firm hold over the country’s most important media outlets made his reelection a virtual guarantee, even without fraud or election interference.

In fact, in the months and years following Russia’s successful illegal annexation of Crimea in March 2014, Putin has always enjoyed an approval rating of at least 80 percent, according to the Levada Center (link in Russian). This level of popularity has persisted as the Russian government continues to sponsor rebel factions in eastern Ukraine. (Putin’s prior approval ratings were in the low 60s after his return to the presidency in 2012.)

Thus, for the most part, Russians have reacted to Putin’s aggressive foreign policy quite positively. Although Western governments and media outlets have roundly criticized and attacked Putin as a tyrant and a warmonger ever since Russia’s policy shift, these attacks have done little (if anything) to turn Russians against Putin, at least publicly.

While Russia’s constitution prohibits Putin from seeking a fifth term as president in 2024, he could seek to amend the constitution before then to allow himself to run on an unlimited basis for the rest of his life.