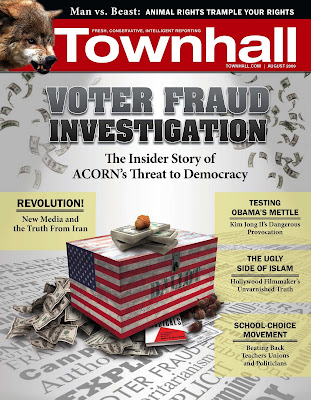 Tired of dead people voting? Tired of radical community organizers threatening our democracy? Wish you had the back-story on the leftists who are taking over our nation? Same here. So for the August issue, we decided to do some digging into ACORN, one of the country’s most liberal and pernicious activists groups, and, boy, will you be disgusted by what we uncovered. We’ve also got some powerful reporting and analysis on the craziness of the animal “rights” movement and their real agenda, the recent victories scored by the school-choice movement, the power and popularity of the honest Hollywood director who’s revealing the ugly side of Islam, and the nightmare that is Kim Jong Il’s North Korea. If you’re not a subscriber, you’re missing out. But there’s good news: Subscribe today and get Michelle Malkin’s new blockbuster book, “Culture of Corruption,” absolutely free.
*** 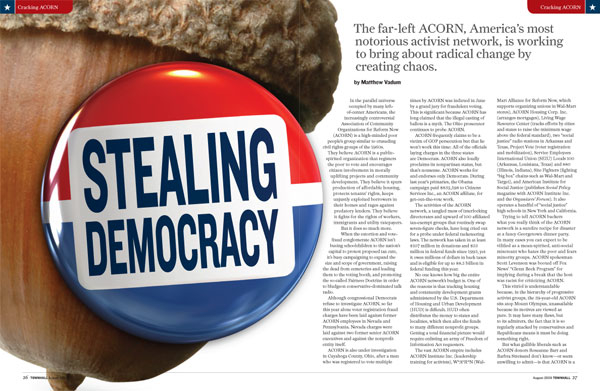 Our cover feature, “Stealing Democracy,” by Matthew Vadum—one of the best researchers and reporters on organizations in the business—exposes the far-left ACORN, America’s most notorious activist network, and how it is working to bring about radical change by creating chaos. Vadum, in his work at the Capital Research Center, has been exposing ACORN and other groups for years and has made his research and knowledge available for Townhall readers.

In the parallel universe occupied by many left-of- center Americans, the increasingly controversial Association of Community Organizations for Reform Now (ACORN) is a high-minded poor people’s group similar to crusading civil rights groups of the 1960s. They believe ACORN is a public-spirited organization that registers the poor to vote and encourages citizen involvement in morally uplifting projects and community development. They believe it spurs production of affordable housing, protects tenants’ rights, keeps unjustly exploited borrowers in their homes and rages against predatory lenders. They believe it fights for the rights of workers, immigrants and utility ratepayers. But it does so much more. When the extortion and vote-fraud conglomerate ACORN isn’t busing schoolchildren to the nation’s capital to protest proposed tax cuts, it’s busy campaigning to expand the size and scope of government, raising the dead from cemeteries and leading them to the voting booth, and promoting the so-called Fairness Doctrine in order to bludgeon conservative-dominated talk radio.

After reading this piece, you’ll understand why Michelle Malkin wrote this about Vadum’s work in her new book: “Many individual whistleblowers provided invaluable information, but I’d like to give special thanks to Anita MonCrief for her enormous courage and vigilance on ACORN corruption—and to Mike Gaynor and Matthew Vadum for their foresight and insight in reporting on the story when no one else would.”
*** 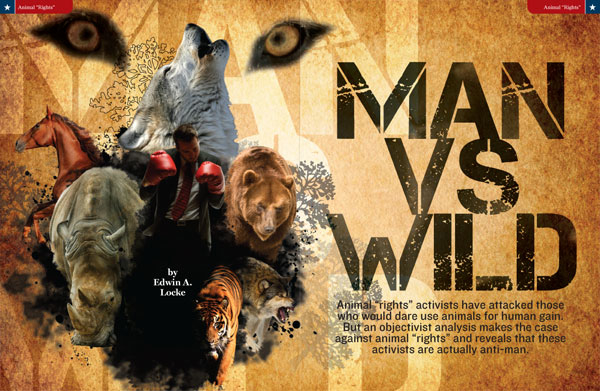 We’ve already received protest e-mail about “Man vs Wild” by Dr. Edwin Locke. (Apparently, members of the animal “rights” crowd read Townhall magazine.) Locke pulls no punches in his criticism of the activists who have attacked those who would dare use animals for human gain, makes the case against animal “rights” and reveals that these activists are actually anti-man.

The animal “rights” movement is alive and well—and as dangerous as ever. Since 2006, animal rights terrorists have made at least seven attacks (including firebombing) on the homes or cars of UCLA researchers who use animals in medical research. This follows decades of criminal activity by members of the movement. They have stolen lab animals and released them into the wild to die (and even killed them), vandalized research labs, firebombed labs and meat-packing plants, threatened lab workers with death, beatings and disfigurement, forcibly disrupted scientific meetings, encouraged murder with chants of “kill, kill, kill,” and actually attempted murder. The Animal Liberation Front (ALF) is the main terrorist arm of the animal rights movement but there are plenty of similar groups. These groups also use picketing, boycotting and legislative activism to gain their ends, but these methods have never precluded violence. The goal of the animal rights movement is to end all human intervention into the lives of animals, which means abolishing factory farms and all farms that have animals, hunting, circuses, zoos, horse-and-buggy rides, horse and dog races, the use of Seeing Eye dogs for the blind, the use of dogs to help police catch criminals and sniff out drugs in luggage, the ownership of pets and fur coats, the eating of meat, the manufacture and use of clothing made of leather or any other animal product, and, most ominously, all medical research that uses animals. All this is motivated by what? 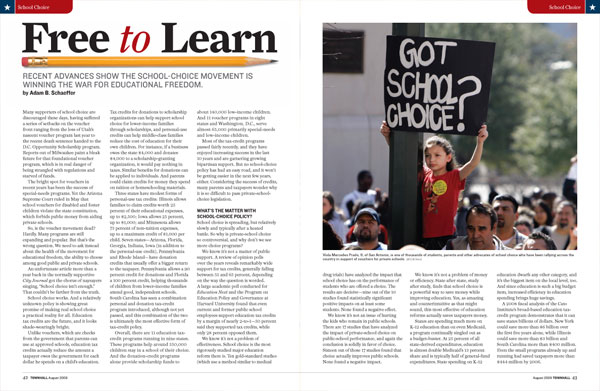 School choice works. And a relatively unknown policy is showing great promise of making real school choice a practical reality for all. Education tax credits are the future, and it looks shade-wearingly bright. Overall, there are 11 education tax-credit programs running in nine states. These programs help around 550,000 children stay in a school of their choice. Most of the tax-credit programs passed fairly recently, and they have enjoyed increasing success in the last 10 years and are garnering growing bipartisan support. 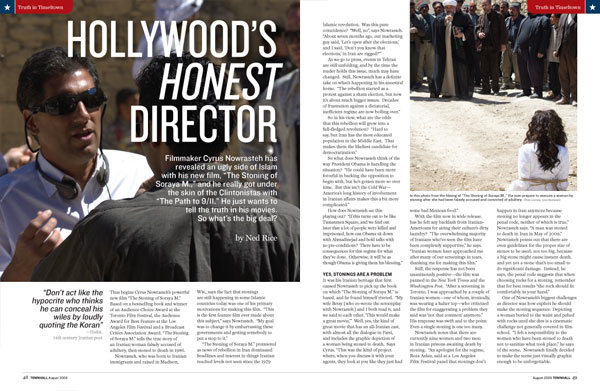 Filmmaker Cyrus Nowrasteh has revealed an ugly side of Islam with his new film, “The Stoning of Soraya M.,” and he really got under the skin of the Clintonistas with “The Path to 9/11.” He just wants to tell the truth in his movies. So what’s the big deal? Ned Rice, author of the popular June 2009 Townhall cover story on Andrew Breitbart, tells Nowrasteh’s story in “Hollywood’s Honest Director.”

Cyrus Nowrasteh once said of being a conservative in Hollywood that “you’re safer being a child molester in some circles,” and it’s a quote he stands by today. So in the interest of full disclosure, Mr. Nowrasteh, are you now, or have you ever been, a member of the Republican Party? “No,” he answers. “On foreign policy and fiscal matters, I’m somewhat conservative. On social issues, I’m more libertarian. But I have no desire to be known as a liberal, conservative or even a libertarian filmmaker.” So how does writer, director and filmmaker Cyrus Nowrasteh wish to be perceived? “As a guy who wants to tell great stories as honestly and uncompromisingly as I possibly can,” he says. 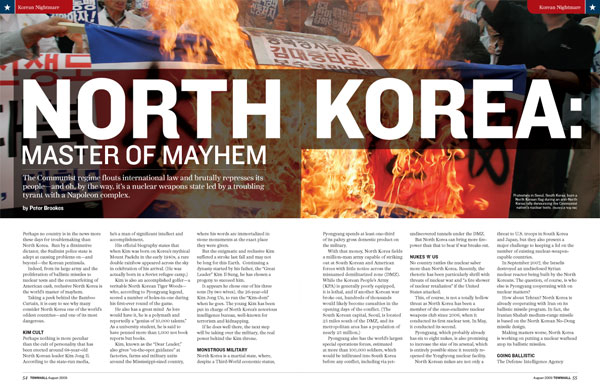 North Korea’s Communist regime flouts international law and brutally represses its people—and oh, by the way, it’s a nuclear weapons state led by a troubling tyrant with a Napoleon complex. Peter Brookes gets into the ugly side of the Norks’ homeland in “North Korea: Master of Mayhem.”

Perhaps no country is in the news more these days for troublemaking than North Korea. Run by a diminutive dictator, the Stalinist police state is adept at causing problems on—and beyond—the Korean peninsula. Taking a peek behind the Bamboo Curtain, it is easy to see why many consider North Korea one of the world’s oddest countries—and one of its most dangerous.

Remember, if you sign up for Townhall magazine today, we’ll send you a FREE COPY of Michelle Malkin’s new book, “Culture of Corruption: Obama and His Team of Tax Cheats, Crooks, and Cronies.” Just click here to get started.