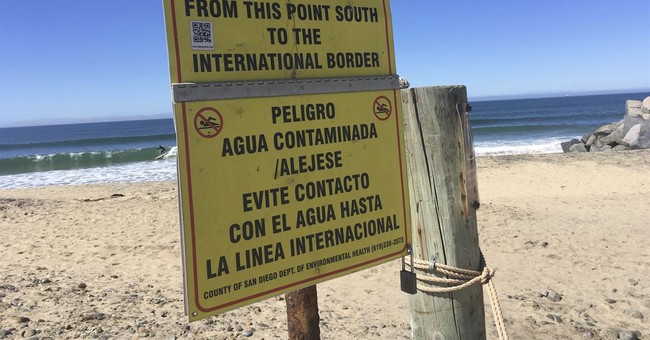 As if California didn't have enough problems, add raw sewage flowing from Mexico to the list. A staggering 14.5 million gallons of untreated sewage entered the United States from Tijuana beginning Saturday, according to KGTV San Diego.

During cleanup, a dead body was found obstructing an intake screen at a pump station where the raw sewage began to overflow. KGTV reports that it's unclear how the dead body ended up at the pump station, but the scene is being investigated.

Monica Sanchez of the Media Research Center notes the sewage problem from Mexico is nothing new:

"As Fox News reports, 'Last year, a pipe across the border in Mexico broke, causing millions of gallons of sewage to flow into the Tijuana River and then to the Pacific Ocean, impacting California coastal areas.' This occurred in December 2018, with reports that six to seven gallons per day were spilling into the U.S.

Just last month, more than 116 million gallons spilled from Mexico into the Tijuana River over a span of 10 days, causing closures of San Diego’s south beaches.

Fox 5 San Diego reports that 'sewage flowing into the Tijuana River has been responsible for closing beaches an average of 300 days a year.'"

In fact, the sewage flow from Mexico has been going on for decades with no end in sight. U.S. Customs and Border Protection agents have even fallen ill after exposure to the toxic Mexican sewage. The city of San Diego first declared a State of Emergency over the situation some 25 years ago.