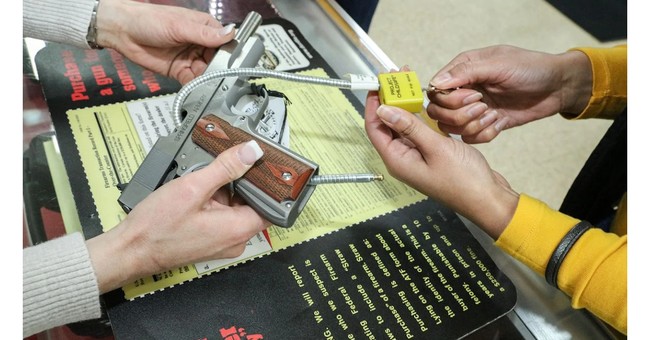 The term "gun safety" to most firearm owners usually translates to gun control and curtailing the Second Amendment. To the firearm industry, gun safety means actual gun safety that works within the confines of Americans' Constitutional rights to keep and bear arms. It means education that teaches first time gun owners how to properly handle and store firearms. And it includes resources for parents to talk to their children about what to do if he or she comes across a firearm.

That's where the National Shooting Sports Foundation (NSSF) and Project ChildSafe come in.

For the last 20 years, Project ChildSafe, with the support from firearm manufacturers, has partnered with more than 15,000 law enforcement agencies to provide free gun safety kits to gun owners. Through Project ChildSafe, more than 40 million gun safety kits, which include cable locks for firearms, have been handed out to Americans in all 50 states and the five U.S. territories.

"The firearms industry is very, very interested and committed to keeping guns out of the wrong hands. We only want lawful gun owners to have guns. We don’t want guns in wrong hands. We don’t want kids to have guns if they’re not old enough or not supervised," NSSF President Joe Bartozzi told Townhall. "The goal is to keep families safe while protecting Americans' Second Amendment rights."

On top of the 40 million gun safety kits, the firearm industry has given out more than 100 million cable locks. It has become standard operating procedure for the locks to be included when a new firearm is purchased.

The cable locks are a reminder for American gun owners: you don't have to have a large gun safe to make sure your firearms are appropriately stored and out of the hands of children and prohibited possessors. In fact, the organization has created an infographic specifically for first-time gun owners that helps them figure out the locking mechanism that is best for them and their family.

But NSSF and Project ChildSafe are doing more than just handing out cable locks to those who need them. They're also forging vital relationships and having difficult conversations.

"We have a parents' guide for youth and mental health that we've developed with the American Foundation for Suicide Prevention," Bartozzi explained. "We thought with a lot of kids being homeschooled, more kids at home, whether parents are home with them or not, there's more of an opportunity for kids to come across an unsafe firearm. Our whole guide is to look at mental health children and to protect them."

Specifically, the guide gives parents a guide of what warning signs to look out for and what actions to take if they suspect their child is at risk of committing suicide. It's part of a bigger goal the AMSP has for reducing the annual suicide rate by 20 percent by 2025, known as Project 25.

The NSSF has also partnered with the Veteran's Administration to reduce the number of veterans suicides.

Part of that is curtailing how doctors address the issue of firearms and suicides and removing the stigma of coming forward to seek help. Many gun owners are veterans who have a fear of getting help. They're afraid of being deemed "mentally defective," meaning they lose their Second Amendment rights for good. But that's where NSSF comes in.

"A lot of veterans are gun owners and NSSF can talk about gun safety in a way that’s not off putting," Bartozzi explained. "We're teaching people how to talk guns in a respectful way, to find common ground and mutual respect."

"There has to be a level of trust between the clinician and the patient," he explained. "Doctors can't automatically default to 'Get rid of guns, don’t handle guns.' It’s going to cause patients to shut down and that's what we’re trying to avoid."

Bartozzi pointed out that the firearms industry receives very little credit for working to prevent suicide. In fact, it was the firearms industry who advocated for the mental health check aspect of a background check, to keep guns out of the hands of those who could potentially be a threat to themselves or others. Instead of focusing on pushing gun control initiatives, Bartozzi said the industry is focused on "better background checks" that are more thorough and comprehensive. That's part of a broader NSSF initiative, both at the federal and state level.

Fix NICS, which was passed back in 2018, is one of the most comprehensive pieces of legislation that will fill the holes in the background check system. All federal agencies are now mandated to report all criminal convictions to the attorney general on a semi-annual basis. States and Indian tribes are responsible for making sure their criminal convictions are accurate and up-to-date. The first semi-annual report that was dropped as a result of Fix NICS resulted in six million convictions being reported to the system, meaning fewer individuals could fall through the cracks. That fix is because the gun industry pushed for it.

To learn more about Project ChildSafe or to donate to the cause, please visit https://projectchildsafe.org/.