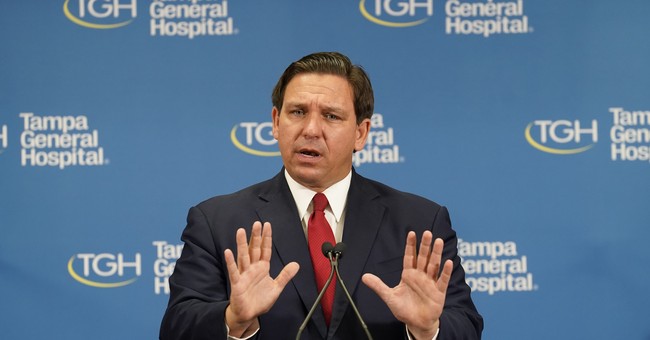 Florida Gov. Ron DeSantis (R) on Monday snapped at a CNN reporter for asking a leading question about the state's Wuhan coronavirus vaccine distribution plan. Specifically, the governor took issue with the reporter failing to "investigate" the causes of long lines and wait times surrounding the vaccine.

"Governor, what has gone wrong with the rollout of the vaccine that we've seen phone lines jammed, websites crash –" CNN's Rosa Flores began to ask.

DeSantis interjected to answer her question.

Flores attempted to talk over DeSantis, at which point the governor stopped her. "Excuse me! Excuse me!" he said, putting his finger up.

"If I could finish my question," Flores said.

"You just said, 'What has gone wrong?' so I'm answering the question," he replied.

Flores replied that she was trying to finish her question but the governor kept interrupting.

"You're giving a speech. You asked a question," he replied.

"You're going to ask how many questions?" DeSantis asked. "You going to ask three? They only got one question," he said, pointing to other members of the press.

Flores repeated her question but added in a small tidbit.

"Where was that at?" the governor replied.

"We've seen is in Duval, Broward, Orange and Lee Counties," she said.

The governor followed up, asking if the reporter had investigated why that was taking place.

"That's my question to you, governor. You're the governor of the state. I'm not," Flores replied.

DeSantis reiteratted that the reporter failed to investigate the reason for a long line in Lee County. "Did you investigate why?" he asked.

"Could you tell us why?" Flores asked.

"Because we distributed to hospitals and hospitals said 'first come, first serve, if you show up, we'll do it.' They didn't use a registration system so there wasn't anything that was done and there's a lot of demand for it," the governor explained.

Flores followed up by asking if Florida is making sure seniors aren't left out.

"The state is not dictating [to hospitals] how they run their operation. That would be a total disaster," DeSantis said. "These guys here are more competent to deliver health care services than a state government ever could be."

It’s good for reporters to be reminded that they’re not immune from being called out to their faces. Sheeeesh.

At some point during the press conference, DeSantis made clear that if hospitals don't meet their required vaccination numbers, their vaccines would be pulled and given to other hospitals that are meeting the demand.

Driving accountability in Florida is key to successfully deploying the vaccine. Our top priority is getting shots in arms so we can protect more Floridians. pic.twitter.com/KhA230mZA5

The type of question Flores asked, how she worded it and her lack of research is why so many Americans can't stand the mainstream media. She didn't attempt to find out why there were lines in various counties. She took the easy way out and decided to ask DeSantis. It was a clear attempt to catch him in a "gotcha!" situation, where he hadn't been made aware of the issues she brought up.

If Flores was truly interested in getting to the bottom of what took place, she could have called local hospitals, local health departments, and other county officials, especially if the lines and issues are only taking place in some areas of the state. But then again, that would mean she would have to do some footwork. And we all know how lazy reporters are.