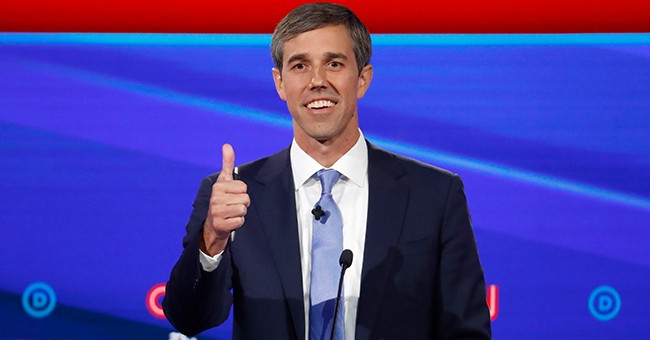 Former Congressman Beto O'Rourke (D) –  the failed senatorial and presidential candidate who made waves for saying "hell yes" he would take Americans' AR-15s – will be starting a new job next month. And it is not in the Biden administration.

O'Rourke will be teaching a seminar about voting rights in Texas at the University of Texas' Lyndon B. Johnson School for Public Affairs. The kicker? The seminar is titled "Texas Democracy and the Fight for Representation" and will focus on various aspects of elections in the Lone Star State.

According to the Austin American-Statesman, the seminar "will examine democracy in action, Texas legislative policy and executive power, and the history of voter rights and voter participation in the state – while also unpacking the running of a political campaign in Texas."

Despite the fact that America is a Republic, the twice-failed politician will talk about democracy and what it means for Texans and the American people. Outside of the class, the former congressman will take part in "bipartisan forums" that focus on politics and public policy making. Those forums will take place online and will be open to the public.

"There are no sidelines in a democracy," O'Rourke told the American-Statesman. "Part of the price of being an American is your expectation to participate — civically, in front of the school board, voting in a presidential election. For young people, time and again, inside and outside of official power, they’re able to move this country ultimately to do the right thing — though it can take a long time and be frustratingly slow."

Naturally, a portion of his seminar will focus on "what it's like to start a campaign and run for office." His hope is to "demystify it."

“There’s no secret handshake, and no necessary magic on the part of the candidate — the basics are actually pretty simple," he explained.

The class, which is solely for graduate students, has 16 slots and will take place over Zoom. The LBJ School for Public Affairs said 300 students attempted to sign up for the class. They are holding a random drawing to determine which students get the highly-coveted spots.

Beto will be paid $10,000 for the course, which is what adjunct assistant professors in the department make. He will be paid an additional $10,000 to conduct a minimum of two public forums.

The former congressman will also teach an online undergraduate course at Texas State University for the spring semester. The goal of that course, according to O'Rourke, is to dive deeper into the Lone Star State's politics with an emphasis on historical movements, figures and institutions.

And no, Beto has no plans to run against Texas Gov. Greg Abbott (R) in 2022. Instead, O'Rourke wants to shift his focus to teaching.

“I have no plans to run for any office,” he told the Statesman. “I’m focused on teaching and that’s what I’ll be spending my time doing.”

Having a twice-failed politician teach about campaigns and how to win them is the most ironic thing imaginable. Why should anyone listen to a guy who could receive support from only 10 percent of the country? Why would anyone care what the guy has to say when he dropped out of the presidential race fairly early on?