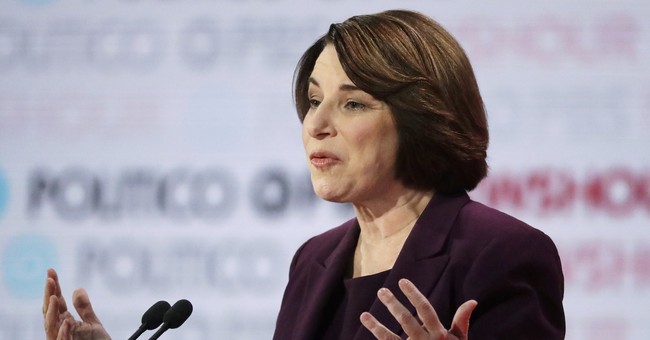 Sen. Amy Klobuchar (D-MN) was asked, point-blank, what she thought of a report in The Washington Post that accuses former New York City Mayor Michael Bloomberg of "making crass remarks, objectifying women and creating a sexist culture in the workplace." Although Bloomberg has denied the allegations, Klobuchar said he needs to stop hiding behind massive ad buys and sit down on a TV show and answer questions.

"I think he needs to come on a show here, like yours Dana," Klobuchar told CNN's Dana Bash. "He has not gone on any Sunday show since he announced. I got to answer questions, like I just did, on my record. And he has to do the same thing."

"I don't think you should be able to hide behind the airwaves and huge ad buys. He has to come on these shows," she explained.

The Minnesota senator said she's been an advocate for Bloomberg being on the debate stage alongside the other 2020 Democrats.

Klobuchar said she has a better argument for her candidacy than Bloomberg does. In particular, she referenced her understanding of states that are in flyover.

"The midwest isn't flyover country to me. I live there. The people who lived there – like poker chips since I am in Vegas and one of the president’s bankrupt casinos – they're not poker chips to me. They're my friends and neighbors," she explained.

Klobuchar made the case that she can be victorious during the Nevada Caucus because the state has elected a majority of women in both the state Senate and legislature.

"This state, this state, has put women in power really like in any other state," she said. "The work that I have done in terms of bringing women with me, not just by running ads, and as we saw in New Hampshire, moderate Republicans, independents, building a coalition. That's what we need to build a coalition to win."

Klobuchar also reminded Bash of an important tidbit: she's raised $12 million dollars since the New Hampshire Primary, just a little over a week ago.

"I can finally be competitive on the airwaves and get teams in every single Super Tuesday state," she explained.