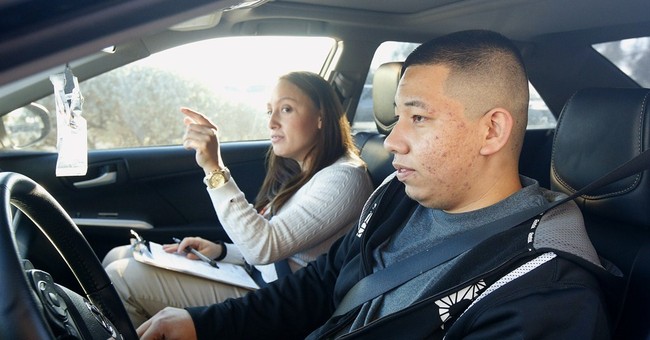 Giving driver's licenses to illegal aliens is nothing new. Typically, Democrat-controlled states, like California and New York, are the ones who dole them out like candy.

A Republican in Idaho is shaking things up. Sen. Jim Guthrie introduced legislation that would allow illegal aliens to "earn" driver's licenses. The illegal alien would still have to undergo the same driving requirements as American citizens. The only difference is that illegal aliens would have to renew their driver's licenses on an annual basis and couldn't be used for voting or purchasing alcohol, the Idaho State Journal reported.

The reason Guthrie decided to make the move? He believes this would help attract agricultural workers throughout the state.

“We have undocumented aliens in the country, and that’s a given,” Guthrie told the State Journal. “Until the federal government decides to address the illegal alien situation, (the proposed legislation) gives us the opportunity to maximize that workforce while they’re here, because they’re here anyway and driving anyway.”

The state senator has heard issues from his constituents who are farmers and ranchers. Some farmers haven't had enough truck drivers to transport their harvest. Other farmers have been concerned about field workers driving to and from work without a license.

“One of the responsibilities of the Legislature is to be responsive to the needs of constituents, and I’m hearing a very considerable need for this from my constituents,” Guthrie said. “I genuinely think it will help agriculture, and I’m getting a receptive ear on the issue.”

The Idaho Dairymen’s Association has helped Guthrie on the proposal and is taking the lead to promote it.

“I think it’s way beyond dairy and way beyond agriculture. I think it has impacts on all of society collectively,” Idaho Dairymen’s Association Bob Naerebout said. “Quite frankly, if you take the time to look at (the issue) you should be supportive. You should be supportive of the fact that if we have people driving on the roads, they should be properly educated and trained to drive. We want people on the roads who have insurance."

Guthrie plans to introduce the legislation later this month or in February.

This is a disaster. One of the many, many reasons I left California was because of illegal immigration and the detrimental impact it has on the economy. Not only do they drag wages down but they also take away jobs from American citizens.

I've had personal experience with illegal aliens benefiting from these types of laws. An illegal alien hit my mom. Her car was totaled. And guess what? The guy walked away scot-free, even though the accident was 100 percent his fault. He had bogus insurance. Some companies exist where people pay $50 a year to get a piece of paper saying they're insured. And that's exactly what this guy had.

Giving driver's licenses to illegal aliens does nothing but gives them yet another incentive to break the law and come to America.

It's disastrous policies like these that will make the gorgeous state I've called home the last 3.5 years into the nightmare that New York and California have become. Once we give these people driver's licenses then they're going to want more: health care, welfare, child care. You name it and they'll demand it.