Eye Roll: NYC Kids Were Encouraged to Fork Over Their Toy Guns 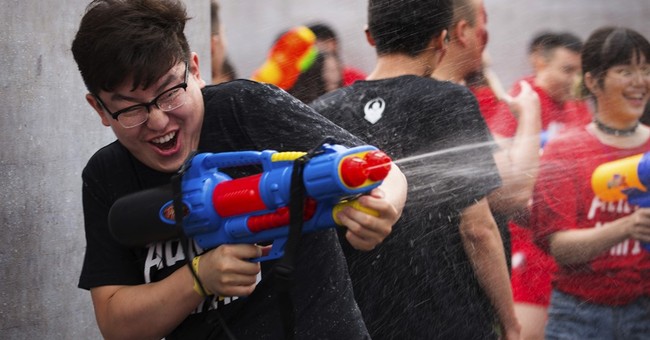 Those who hate firearms and the Second Amendment have long touted their belief that so-called "buyback" programs should exist. Just look at failed 2020 Democratic presidential candidate Beto O'Rourke. He continually proposed a mandatory buyback of "assault weapons," you know, the big, black, scary-looking AR-15s that anti-gunners say stand for "assault rifle" (when really the AR is an abbreviation for ArmaLite Rifle model 15). Those who know nothing about firearms or how they function tell us those "assault weapons" are fully-automatic. The reality is that AR-15s – the most commonly owned modern sporting rifle in America and the one most often targeted by the gun control mob – is semi-automatic, meaning it fires one round per one pull of the trigger.

But it turns out that actual firearms are not the only ones that the government wants to "buyback" (and that term in itself is stupid because it implies the government owned the firearm to begin with when they did not).

Kids in Long Island, New York were encouraged to hand over their water guns and toy guns in exchange "for something fluffier, colorful, or sports-oriented," Fox News reported. The exchange is part of the fourth annual Toy Gun Exchange which local law enforcement believes helps curb gun violence, something they aim to reduce because of "recent shooting tragedies that have taken place across the nation."

“Long Island youth can exchange guns for non-violent toys. This year we have several hundred toys to be exchanged and more than in years’ past. It keeps growing every year,” LaMont Johnson, a trustee of Hempstead Village and the Hempstead Board of Education, told Fox News in mid-December.

Sean Acosta Jr., a former New York City Police Department (NYPD) officer, started the program in 2016 to help protect kids from the real threats posed by the pieces of plastic. According to Acosta, in the heat of the moment it is difficult for police officers to know the difference between a toy gun and a real firearm.

“The message ‘guns are not toys’ is critical to teach every child. Whether it means staying away from violence and crime, or teaching to never play with a firearm, it’s initiatives like these that save lives and help children learn a lifesaving message,” Acosta explained.

If a child showed up to the event without a toy gun to turn over, event organizers would give them a plastic gun to "turn them in" so they could get an educational or sports-oriented toy instead. The idea is to encourage kids to be part of the greater movement that says guns are not toys.

This Christmas season between 80 and 100 kids participated in the program and exchanged their toy guns for something more gun control advocates consider to be more appropriate.

According to Dr. Matthew Tipton, an Alcorn County, Mississippi SWAT team member and father of three, programs like this do more harm than good.

“This is being done in good spirit, but I don't think it is a good strategy. I am a physician, and I practice evidence-based medicine. We know early exposure to firearms and firearms safety together reduces gun accidents in children. Keeping guns secured and unloaded also protects children,” Tipton explained. “Making guns ‘forbidden’ adds to the allure for kids. My children are all are being taught to respect weapons.”

Competitive shooter and former Tulsa, Oklahoma police officer Diana Mueller sees this as a missed opportunity to talk to kids about firearm safety.

“The anti-gun crowd has irresponsibly focused the conversation on the firearm, a tool, that neither wishes to do harm or good. Removing the opportunity to have a conversation and teach firearms safety makes no one safer,” Mueller told Fox News. “They are and have been indoctrinating our children that firearms are ‘bad,’ disguising it under the cloak of safety as opposed to disarmament. Moreover, access to toy guns is nothing new. As opposed to the recent trend in shootings happening in gun-free zones, toy guns are nothing new. You used to be able to buy a real gun from the Sears catalog and have it shipped to your home. School shootings were not a problem during that time, but they are now, so it makes no sense to me to blame firearms on shootings.”

It's important for kids to know the difference between a toy gun and a real firearm. It's also important for them to know the basics of gun safety. Parents can do everything in their power to make sure their kids don't come in contact with a firearm but there is a possibility that they will come across a gun, either at a friend's house or elsewhere. Teaching kids to respect firearms is a far superior tool than removing anything and everything that even remotely resembles a gun. Pretending like guns don't exist doesn't take away the danger and responsibility associated with firearms. It just makes these kids unequipped to handle that type of situation.

If you look at the course of American history and firearms, what has changed? It hasn't been the firearm – the tool that can be used to defend oneself. It's our attitude towards that tool. As a society, we have put up blinders and acted like evil will suddenly cease to exist. We're setting up our children for failure. Teaching a kid about firearm safety is something every parent has a responsibility to do, even if they don't own a gun.