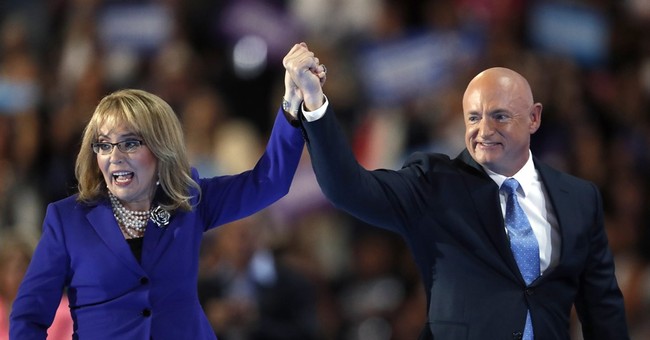 Astronaut Mark Kelly, the husband of former Congresswoman Gabrielle Giffords (D), is running for Sen. Martha McSally's (R-AZ) during the 2020 election cycle. In the midst of the Mueller report dump, it was revealed that Kelly repaid $55,000 to the United Arab Emirates for a speech he gave last year, CNN reported.

Kelly gave a speech alongside his twin brother, Scott Kelly, who is also an astronaut. The speech was part of an event sponsored by the Crown Prince of Abu Dhabi, Sheikh Mohamed bin Zayed Al Nahyan, called "The Sky is not the Limit: Life Lessons from NASA's Kelly Brothers." The speaking engagement was even promoted by the United States Embassy in the United Arab Emirates.

Kelly's campaign spokesman defended the astronaut for taking the funds.

"Like many other former astronauts, Mark has given speeches to a variety of groups about his experiences in space, the United States Navy, and how he and (his wife, former Arizona Rep. Gabby Giffords) worked together to overcome tragedy. This engagement was focused entirely on Mark sharing his experiences in space and discussing our countries' space programs," Campaign spokesman, Jacob Peters, told CNN.

“This campaign is about the people of Arizona, not corporate PACs and the mess they’ve created in Washington. I won’t take a dime of corporate PAC money, and I’ll only answer to Arizonans," Kelly said in a statement on his campaign website.

The main reason Kelly is returning the funding is because of his status as a senatorial candidate. "The appearance could open Kelly to criticism of foreign influence now that he's running for the Senate," CNN reported.

Not only that but the United Arab Emirates has been accused of violating basic human rights, according to Human Rights Watch. Various reports from the United Nations and State Department back up those claims.

From the State Department:

Human rights issues included allegations of torture in detention; arbitrary arrest and detention, including incommunicado detention, by government agents; political prisoners; government interference with privacy rights; undue restrictions on free expression and the press, including criminalization of libel, censorship, and internet site blocking; substantial interference with the rights of peaceful assembly and freedom of association; the inability of citizens to choose their government in free and fair elections; and criminalization of same sex sexual activity, although no cases were publicly reported during the year. The government did not permit workers to join independent unions and did not effectively prevent physical and sexual abuse of foreign domestic servants and other migrant workers.

The government investigated, prosecuted, and brought to conviction cases of official corruption.

The United Nations, human rights groups, and others alleged UAE military operations as part of the Saudi-led Coalition in Yemen killed civilians, damaged civilian infrastructure, and obstructed delivery of humanitarian aid. Further, human rights groups alleged UAE-backed security forces in Yemen committed torture, sexual assault, and mistreatment against detainees. The government rejected allegations that members of its security forces serving in Yemen had committed human rights abuses, and there was no publicly available information on whether the government carried out any investigations into these reported incidents.

There are multiple reasons why Kelly returned the money:

1) He wants to be able to say no foreign countries can influence him. If he kept the money and advocated for policies that aligned with said country's interests, he can – and will – be accused of conflicting interests.

2) Keeping money from a country that criminalizes the LBGTQ, bars workers from joining independent unions and not protecting people from physical and sexual abuse would hurt his cause. Those are issues that Democrats are passionated about. Throw in their censorship and election policies and voters would be freaked out.

3) Keeping the money could also have a negative impact on Giffords' political career, as well as their gun control group, Giffords.

If the $55,000 stayed in Kelly's bank account, he'd be monetarily richer but politically poorer.