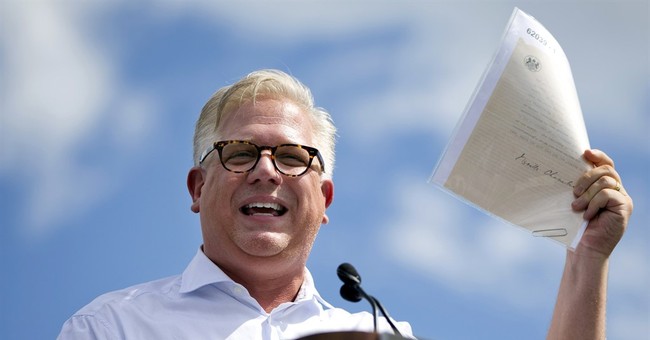 It appears that some details of the original Hollywood Reporter story are not factually correct. Levin took to Twitter to make the following corrections:

CRTV issued the following correction to the Hollywood Reporter story:
Mark Levin and Glenn Beck did not merge.  CRTV and TheBlaze merged.  Mr. Levin does not hold management authority in CRTV...

... The decision for the merger was made by the principals of CRTV and TheBlaze.  Also, the headquarters will not be in Dallas, TX

Beck tweeted the original "exclusive" story though without angry corrections. Details appear to be murky.

The Daily Wire's Ben Shapiro congratulated the duo on their merger.

Thank you Ben. We are thrilled to be joining forces with @marklevinshow and all that he and his crtv team have built. They already had a powerhouse line up. We are all stronger together. #blazemedia https://t.co/iOHszAIx9U

CRTV already changed their name and logo on Twitter:

Conservative powerhouses Glenn Beck and Mark Levin are coming together to merge their conservative media companies, TheBlaze and CRTV to create Blaze Media, the Hollywood Reporter reported. Together, the two brands are believed to reach 165 million people by TV, various digital platforms and social media.

Although the transaction won't be official until Monday, Beck opened up about the merger to the Hollywood Reporter on Sunday, saying the duo hope to create an independent, powerhouse media company.

“This is the beginning of scale,” Beck said. “Anyone who loves the Bill of Rights and pursues honesty, I want them all in. We’re an open book. Let’s talk."

“Tens of millions of Americans have had it with the biased, ideologically driven mainstream media outlets that sanctimoniously advance their own agendas under the guise of ‘news’ and ‘journalism.’ Conservatives actually believe in a free press and the rest of the Constitution,” Levin said.

Over the last few years, TheBlaze has gone through numerous staff cuts and has been in the red. They've also lost major surrogates, like Dana Loesch and Tomi Lahren. The media company had previously been in talks with Ben Shapiro over merging with The Daily Wire, although that fell through. Beck said over the last 12 months, TheBlaze has been profitable although it was in the red in the past.

“We worked hard to make sure we’re in the black. If we had spoken to CRTV a couple of years ago, it would have been a different story,” Beck said. “We talked about a merger when neither of us need it. That’s the best time.”

According to Beck, the on-air talent will have the ability to express their opinions, whether or not he agrees with what they say.