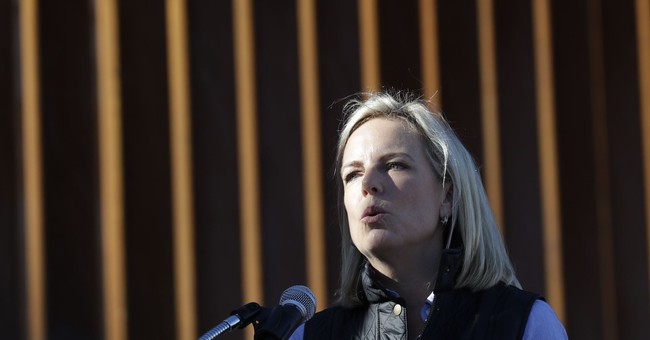 In an internal memo to various government agencies, Homeland Security Secretary Kirstjen Nielsen asked for civilian law enforcement officers to be sent to the United States-Mexico border, POLITICO reported. Should leaders of the departments of State, Labor, Energy, Transportation, Interior or Justice send law enforcement officers to the border, the move would be unprecedented. Their mission, however, would be simple: to keep caravan riders from entering the United States.

“Consistent with the President’s direction to do all within our authority to secure U.S. borders, I am seeking your assistance and ask you to prioritize efforts to help us prevent illegal entry into the United States,” Nielsen wrote.

If officers did end up at the border, they would be tasked with helping Border Patrol "conduct its mission," rather than pushing papers. Although Nielsen didn't say how many officers she needed, she did say the strategy was “part of a broader effort to make maximum use of Federal civilian law enforcement personnel,” including from her own agency.

While it's common for federal officials to jump between departments as needed, it's not very common for people to jump into Border Patrol and Customs.

“CBP specifically getting detailees from other agencies is very uncommon,” Leon Fresco, former head of the Justice Department’s Office of Immigration Litigation under the Obama administration, told POLITICO. “And for this particular mission, becoming immigrant enforcement agents is something I’ve never heard of.”

If law enforcement does head to the border, active duty troops will be pulled from their mission sooner, DHS officials said.

Americans Notice a Very Problematic Part About Those 'Free' Covid Tests the Government Is Sending Out
Townhall
Sadly, this new campaign ad from Ron DeSantis does not meet with Joe Scarborough's approval. How will the Florida governor ever recover?
Twitchy
The Capitol Police Are Spying on Members of Congress, and the Details Are Incredibly Disturbing
Redstate
Military Whistleblowers May Blow Up the COVID Vaccine Narrative
PJ Media