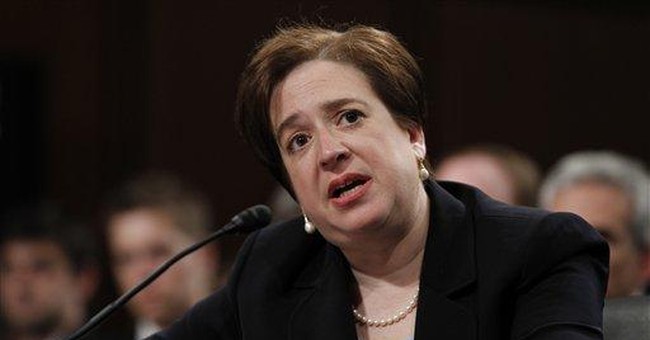 During a talk at Princeton University on Friday, Supreme Court Justice Elena Kagan expressed deep concern over the legitimacy of the Court after Justice Anthony Kennedy retired. Kagan is concerned that the "middle position" — also known as the unpredictable vote – is now gone and Kennedy could be replaced with someone (Judge Brett Kavanaugh) whose views fall more on the conservative spectrum.

Kagan explained that Kennedy and Sandra Day O'Connor did something important for the Court: they made it look "impartial and neutral and fair."

"Part of the Court's strength and part of the Court's legitimacy depends on people not seeing the Court in the way that people see the other governing structures of this country now," Kagan explained. "In other words, people thinking of the Court as not politically divided in the same ways. It's not an extension of politics, but instead somehow above the fray."

Kagan believes it's important for the Court to uphold that integrity, especially because we live in a deeply divided political climate.

"In the last, really 30 years, starting with Justice O'Connor and continuing with Justice Kennedy, there has been a person who found the center or people couldn't predict in that sort of way. That enabled the court to look as though it was not owned by one side or another and was indeed impartial and neutral and fair," Kagan said. "It's not so clear going forward. That sort of middle position, you know, it's not so clear whether we'll have it."

Here's a visual of how the Supreme Court justices sit on the political spectrum. pic.twitter.com/3zPrdm5B7u

Although Kagan attempted to explain the importance of Kennedy's seat on the Court, she actually did herself a disservice. She admitted a few things:

1)  While, in theory, the Supreme Court is an "impartial" group of people deciding and interpreting law that will impact us for generations to come, it's not. For the most part, we know how justices are going to side. Justices Sonia Sotomayor, Elena Kagan and Ruth Bader Ginsburg are pretty much always going to fall on the liberal side of the position. Justices Samuel Alito, Neil Gorsuch and Clarence Thomas are pretty much always going to fall on the conservative side of the issue. That leaves Justices Anthony Kennedy falling to the left-of-center and John Roberts falling to the right-of-center. That's not being impartial in the least bit. If it was, Kennedy's retirement wouldn't be such a huge deal. You know why? Because there would be eight other justices with just as much impartiality as him.

2) Kagan also, in a roundabout kind of way, admitted that she's not impartial or neutral. In other words she said "Hey, look at me! I sit on the liberal side of the issues. Democrats look at me to side with them."

3) She also inferred that Kavanaugh's confirmation would throw the Court to the right (as if none of us knew that).

It makes you wonder: why do new justices have to be impartial but those currently on the bench don't have to be? If we went with Kagan's theory then shouldn't everyone on the Court be kicked off and replaced with people who don't go with their political persuasions?