ICYMI: Feinstein's Office Will Be Investigated For 'Leaking' Ford's Letter 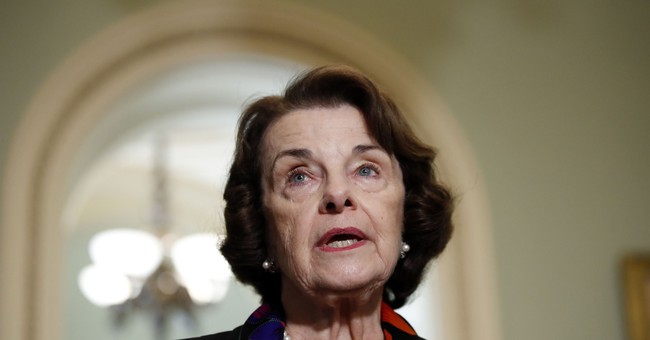 During an interview on "Face the Nation" last week, Sen. Tom Cotton (R-AK), said Sen. Dianne Feinstein (D-CA) will be investigated for leaking Dr. Christine Blasey Ford's letter detailing her sexual assault allegations against Judge Brett Kavanaugh, POLITICO reported. Feinstein and her office have remained adamant that they did not leak Ford's letter to the public.

"Ms. Ford made these allegations in a confidential letter to Dianne Feinstein in July, shortly after Brett Kavanaugh was nominated. The very night he was nominated, Chuck Schumer, the Democratic leader, said that he would do everything in his power to stop the nomination. And that's what happened," Cotton said. "For three months, the Democrats have turned the advise and consent process into a search and destroy mission."

Cotton said Feinstein and her office could have kept Ford's information private and handled it through the process established by the Senate Judiciary Committee.

"There is a well-established process of confidentiality on the [Senate Judiciary] Committee. Dianne Feinstein could have shown that letter to Chuck Grassley and the two of them, as leaders of that Committee, could have shared it with the FBI, who could have discretely conducted this inquiry in July, in August, without betraying Ms. Ford's confidences," Cotton explained. "And they have betrayed her."

According to Cotton, the Democrats betrayed Ford's trust on multiple accounts: one by Feinstein's office leaking her letter to the press and the second by referring her to lawyers who failed to properly advise her that the Committee would be willing to travel to California to hear her testimony. Instead, Ford's lawyers failed to make that clear to her, which forced her to testify in front of the Committee and the public.

"The Democrats have disgraced this process and the United States Senate in the orchestrated smear campaign of character assassination against Judge Kavanaugh," Cotton said.