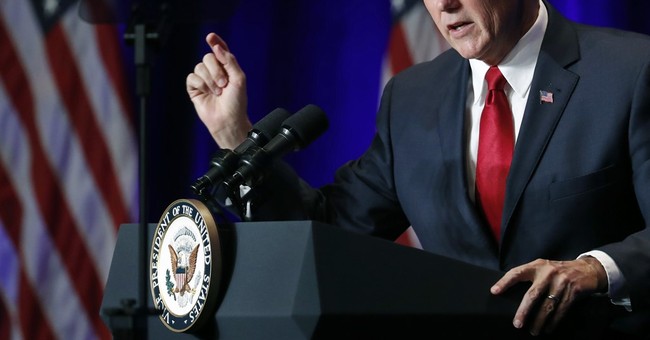 At the National Conservative Student Conference hosted by Young America’s Foundation, Vice President Mike Pence addressed the large number of students Friday, calling on their energy, vision, and passion to successfully uphold  conservative values in America. He also expressed enthusiastic support for the U.S. armed forces, promising that, “President Donald Trump is going to be the best friend the armed forces of the United States will have ever had in the White House.”

In a speech that outlined the victories and hopes for conservatives under the Trump Administration, the vice president took a sober tone when addressing the issue of national security.

Pence honored the U.S. soldiers who fell in combat last week as heroes: “Today, at Dover Air Force Base, two heroes of this generation came home” he told the students. “Sergeant Jonathan Hunter and Specialist Christopher Harris of the 2nd Airborne. These two heroes fell defending our freedom in Afghanistan this week. We honor their service and their sacrifice.”

The 23-year-old Jonathan Hunter, from Indiana, was married last October, and had been in Afghanistan for a little over a month. Christopher Michael Harris, 25, from North Carolina, also lost his life in the same attack of a NATO convoy.

The vice president continued,  “Their names will be enshrined on the hearts of a grateful nation and their families and their loved ones will remain in our prayers.

“For no greater love has a man than this, that he should lay down his life for his friends.”

In light of the soldiers’ recent deaths, Pence promised that the Trump Administration is working to support and rebuild the military, saying, “We also honor them through our actions. ” He said that the president “has called on the Congress to pass one of the biggest investments in our defense spendings since the days of the Cold War.”

“…we are once again going to give our soldiers, sailors, airmen, marines, and coast guard the resources and training they need to accomplish their mission and come home safe,” Pence said to applause.

Praising the Young America's Foundation as a "bulwark of American greatness," he told the young conservatives that they "fight for those timeless principles of individual freedom, of strong national defense, free enterprise, and traditional moral values." While the Trump administration is fighting for conservative laws and reforms, Pence laid responsibility on the large audience of young people, saying that he and the president counted on their work.

"There’s a lot of work to do, but I know I’m looking at a lot of young people that are anxious to get to it," he said. "So to this rising generation of Conservative leaders I'll tell you, you picked a great time to show up."