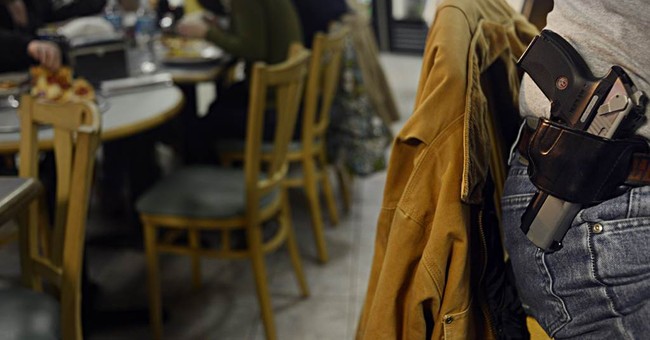 Editor's Note: This column originally appeared in the June issue of Townhall Magazine.

I have two state-issued permits in my wallet.

My state-issued driver’s license allows me to get into a car and drive to visit friends in other states. If I decide to drive to visit my friend Pablo in Arizona, or Jacqueline in New York, my North Carolina-issued license will be honored by every law enforcement agency I may encounter along the way.

If I were to visit Pablo, I would not need to obtain additional driver’s licenses to drive through Tennessee, Arkansas, Oklahoma, Texas, New Mexico, and Arizona. If I were to visit Jacqueline, I would not need to obtain additional licenses for Virginia, Maryland, Delaware, New Jersey, and New York. No matter where I drive in the United States, I have reciprocity with my driver’s license, under the presumption that if I am deemed competent to drive in one state, then I am competent enough to drive in every state.

If I even brought up the idea that I might need a driver’s license in each individual state, reasonable people would look at me as if I might need my current license revoked, at least until I’m checked over thoroughly by mental health professionals.

When I drive through Tennessee, Arkansas, Oklahoma, Texas, New Mexico, and Arizona to see Pablo, I would legally be allowed to carry my concealed handgun and have my permit recognized by each and every one of those states, as each of these state attorneys general or legislature has made an agreement with North Carolina on a state-by-state basis.

Law enforcement officers in each of these states would check to ensure that my concealed carry permit and driver’s license were valid, that we did in fact have reciprocity in our concealed carry agreements, and they’d send me on my way.

If I went to see Jacqueline, however, I would face the very real probability of being thrown violently to the ground and handcuffed (if not shot) in Maryland, Delaware, New Jersey, and New York for carrying that same handgun, with the same permits.

Am I more of a threat when I cross state lines? Does the air in the Northeast lead to violent psychosis that erases all my training and makes me prone to random acts of homicide?

Of course it doesn’t.

Some think that what we lack on the federal level is the sort of “common sense” reciprocity agreements for concealed carry permitting that we do for driver’s licenses.

Sen. John Cornyn (R-TX) has offered Senate Bill 1908: The Concealed Carry Reciprocity Act of 2014, in hopes of rectifying this glaring gap in our state-level reciprocity laws. Cornyn and the bill’s other co-sponsors hope to ensure that citizens won’t face the sort of persecution that Florida resident John Filippidis did as he traveled through rabidly anti-gun Maryland.

Filippidis had done nothing wrong before he was pulled over after being tailed for 10 minutes by an overzealous Maryland Transportation Authority police officer. The officer made Filippidis step out of his vehicle, searched him, and demanded, “You own a gun, where is it?”

Other law enforcement officers arrived, interrogated him, and searched his vehicle over the course of the next 90 minutes, simply because the trooper discovered he had a valid Florida concealed carry permit and hoped to find the gun and throw Filippidis in jail. Presumably, a national reciprocity bill would end this sort of persecution by unreasonable police officers.

But is a reciprocity bill actually needed for what should be a constitutional right to carry a firearm for self-defense, regardless of where a law-abiding citizen happens to travel?

There are many who feel that while Cornyn’s bill is sympathetic to the plight of gun owners, it both betrays the theory of constitutional carry (that the Second Amendment is all the justification needed to carry a firearm, in the open or concealed), and that it could be a “Trojan Horse” for follow-on laws that could mandate that all states must require a prohibitive amount of training, liability insurance, or other hurdles imposed to make concealed carry as onerous as possible.

In the end, citizens shouldn’t need a permit to exercise a constitutional right. Reciprocity to travel from state to state while armed should need no more justification than the 27 words of the Second Amendment, which conclude, “... the right to keep and bear arms shall not be infringed.” •

Bob Owens is editor of BearingArms.com