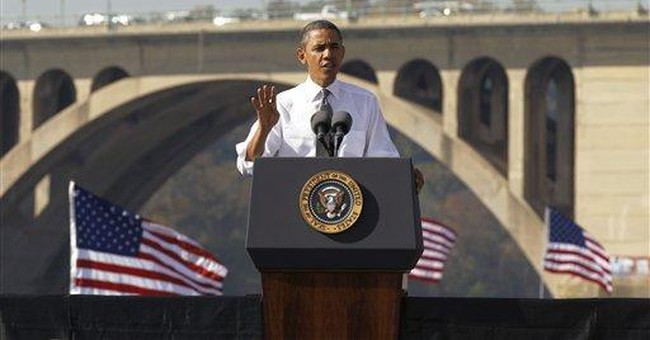 Editor's Note: This column originally appeared in the June issue of Townhall Magazine.

The United States does not face an infrastructure crisis, at least with regard to transportation. That’s just a story told by people who want to raise your taxes so they can get rich.

Supporters of tax increases talk about crumbling highways and collapsing bridges. In fact, our highways and bridges are better than ever. The number of bridges considered “structurally deficient” has fallen by more than 50 percent since 1990. By actual measurement, our roads are smoother than ever.

What about the bridges that fell in Minnesota and Washington? The National Transportation Safety Board found that the Minnesota bridge had a construction flaw that no amount of maintenance could have detected or prevented. The Washington bridge fell when it was struck by an oversized truck that should not have been on the bridge; it would have fallen if that truck had tried to cross it the day it opened.

The real crisis is not bridges collapsing due to poor maintenance but perverse incentives that result in money being spent in the wrong places. The best incentives are created by user fees, as those fees tell users what it costs to provide them with a good or service and they tell producers where users are willing to pay for more services.

Before the mid-1960s, most of the nation’s transportation network was paid for out of user fees. Gas taxes and tolls paid for roads; fares paid for airplanes, intercity trains, and urban transit; ticket fees paid for airports. The nation’s infrastructure was in pretty good shape.

These decisions weakened the incentives that had given America the greatest transportation system in the world. Highway congestion grew rapidly because money paid by highway users was diverted to transit instead. Desperate for funds, highway agencies sought revenues from sales, property, and other taxes, making highway improvements more responsive to politics than user needs.

In 1991, Congress created a new transit fund aimed at helping cities build rail transit. Transit officials soon realized that the cities that planned the most expensive transit projects got the most money. The costs of building light rail grew from $17 million per mile (in today’s dollars) in 1981 to well over $100 million per mile today.

Since 1970, federal, state, and local taxpayers have spent about a trillion dollars (in today’s money) subsidizing transit, yet per capita transit ridership has declined. Despite all this spending, our transit systems are in poor shape.

Politicians love to spend money on capital improvements, such as new rail projects, because they get publicity from ribbon cutting ceremonies. They are less interested in funding maintenance, as they get less publicity from it.

As a result, the Federal Transit Administration found in 2010 that the nation’s transit systems suffered from a $78 billion maintenance backlog, most of it due to deteriorating rail transit lines. The backlog has grown since then as transit agencies haven’t even spent enough to maintain the systems in their current poor state of repair.

Once again, this is not an infrastructure crisis but a crisis of poor incentives. If transit were funded out of user fees instead of taxes, transit agencies would run buses (which have low capital and maintenance costs) instead of building expensive rail lines that are also costly to maintain.

A common solution proposed to the infrastructure crisis is to double federal gas taxes, giving a fifth of that increase to transit. Transit agencies would then go on a spending spree building more rail lines that they couldn’t afford to maintain.

The real solution is to return to a system of funding transportation out of user fees. No general funds of any kind should be used to subsidize highways, transit, railroads, or airlines.

Consumers would decide where transport dollars should go by spending their own dollars on the transport modes of their choice, while transport managers would maintain facilities in order to attract consumer dollars. Unlike taxes, which create winners and losers, user fees turn everyone into winners. •

Randal O’Toole (rot@cato.org) is a senior fellow with the

Cato Institute and author of “Gridlock: Why We’re Stuck in Traffic and What to Do About It.”