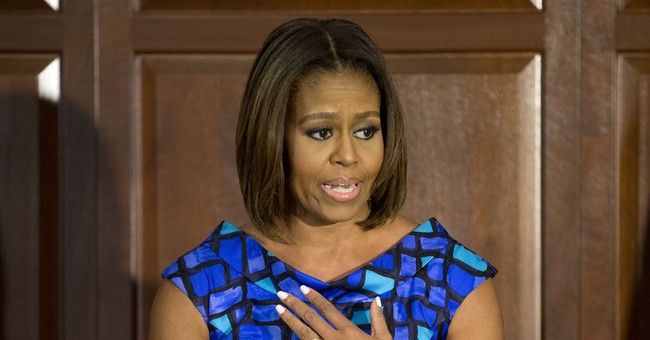 First Lady Michelle Obama defended her school lunch program in an op-ed published in the New York Times Wednesday. It was well-timed, considering angry children are tweeting relentlessly about their small and limited lunch options:

All we get for lunch today. Thank you Michelle Obama pic.twitter.com/1rACNXM9aP

Obama’s primary pitch for the program was not an appeal to effective policy-making or good governance, but rather, an appeal to science. Obama correctly stated that “less sugar, salt and fat” in a child’s diet improves overall health. No one is denying this fact, and it is wonderful to allow children the option of serving themselves up a plate of fresh fruits and vegetables. However, mandating what a child eats for five out of the average 21 meals a week they consume is neither effective nor good-policy making.

The problem with the op-ed was, primarily, that it didn’t address the issue: government overreach.

Right now, the House of Representatives is considering a bill to override science by mandating that white potatoes be included on the list of foods that women can purchase using WIC dollars. Now, there is nothing wrong with potatoes. The problem is that many women and children already consume enough potatoes and not enough of the nutrient-dense fruits and vegetables they need. That’s why the Institute of Medicine — the nonpartisan, scientific body that advises on the standards for WIC — has said that potatoes should not be part of the WIC program.

Potatoes? Really? It isn’t as though they are buying cigarettes or alcohol.

A recent investigation by NBC4 in Washington, D.C. found that more than 60,000 low-income children have actually been skipping lunch:

So what is the solution to getting kids to eat healthy? Parents have been struggling with this problem for ages.