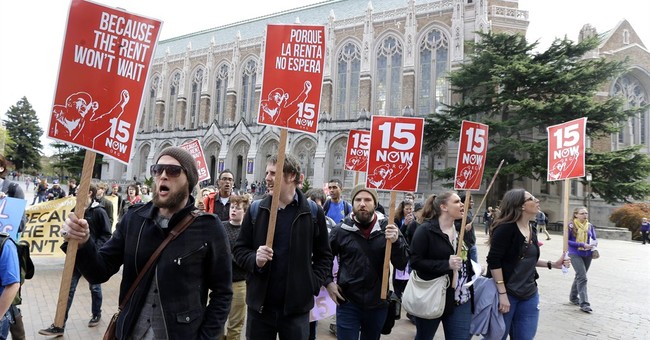 Seattle’s experiment with a higher minimum wage has detrimentally impacted workers with less pay and fewer hours. The $15/hour minimum wage law was passed in 2014. It was on a phased four-year timetable. Right now, it’s at $11/hour, which has also screwed over workers. The latest chapter in this fight is interesting since it appears city hall reached out to friendlier data crunchers at Berkeley to compile a report that was very accommodating of minimum wage hikes a week before the University of Washington’s study was set to be published criticizing the initiative for the reductions in workers’ pay. Let’s have the Seattle Weekly set the primer:

To review, the timeline seems to have gone like this: The UW shares with City Hall an early draft of its study showing the minimum wage law is hurting the workers it was meant to help; the mayor’s office shares the study with researchers known to be sympathetic toward minimum wage laws, asking for feedback; those researchers release a report that’s high on Seattle’s minimum wage law just a week before the negative report comes out.

Those reports have previously grated advocates of the $15 minimum wage. In September, Coucilmember Kshama Sawant took the research group to task for various aspects of a report from last July, which Sawant argued cast the wage law in a poor light due to bad methodology and accused the director of the study, Jacob Vigdor, of “idelogical editorializing.”

In a brief interview Monday [June 26], Vigdor defended the group’s most recent study, saying it was based on far more granular data than the Berkeley team had access to. Specifically, the state provides his group special access to individual worker data while the Berkeley researchers have a “public use data set, which is basically a bunch of … summaries of this data.”

“Ours has a lot more details and depth to it, because we’re looking at individual workers,” he said.

Asked whether he thought the Berkeley report was a ploy by City Hall to preempt their report, Vigdor said: “I’m not going to comment on that.”

June 20, 2017: University of California-Berkeley’s Institute For Research And Labor Employment released a study claiming that Seattle’s minimum wage hike has increased pay for workers without eliminating jobs. The study claims that it “was prepared at the request of the Mayor of Seattle,” and is immediately criticized for having a partisan-agenda and ignoring key facts.

June 26, 2017: University of Washington researchers released a study that finds Seattle’s minimum wage increase has slashed workers’ hours, costing them on average $125 a month. The study is called “very credible,” by MIT economics professor David Autor and analysts from FiveThirtyEight and The Washington Post both acknowledge that these findings are bad news for those that support minimum wage increases.

June 26, 2017: The Seattle Weekly’s Daniel Person publishes a piece entitled, “The City Knew the Bad Minimum Wage Report Was Coming Out, So It Called Up Berkeley,” with quotes from Seattle Mayor Ed Murray’s spokesperson indicating that the Mayor’s office was aware that University of Washington’s report would not have favorable results for minimum wage increase advocates. Person’s reporting then states that the Mayor’s office shared University of Washington’s findings with UC-Berkeley researchers that were supportive of minimum wage hikes, in order to give UC-Berkeley a chance to craft their own report that had positive results about the increase.

Now, Fox News has obtained emails showing that Mayor Murray gave the Berkeley team a deadline for their report, noting it should be published a week before University of Washington’s analysis to preempt the study showing that the Rain City doesn’t know basic economics. I mean one of their council members is a socialist after all:

“The moment we saw it was based on flawed methodology and was going to be unreliable, the Vigdor study no longer speaks for City Hall,” said Seattle City Councilwoman Kshama Sawant.

According to emails obtained by Fox News, Reich was given a deadline by Murray. His work was to be completed just before the University of Washington team announced its results. Vigdor, the director of the study, shared with city council staffers the preliminary results of the research and provided a timeline for when it would be made public.

Liberals, there are times where the data is not on your side. Concerning the minimum wage, there are now two reports showing that it hurts workers. Now, you’ve resorted to preempting your own data teams that are coming up with less than rosy pictures. The $15/hour minimum wage is a very, very bad idea. And it’s not just Seattle suffering the consequences. New York’s workers are faced with fewer jobs, fewer hours, and less pay due to minimum wage fever taking hold in Albany.