Scott Walker: ‘Should We Get In, We Will Talk About What We’re For, Not What We’re Against’ 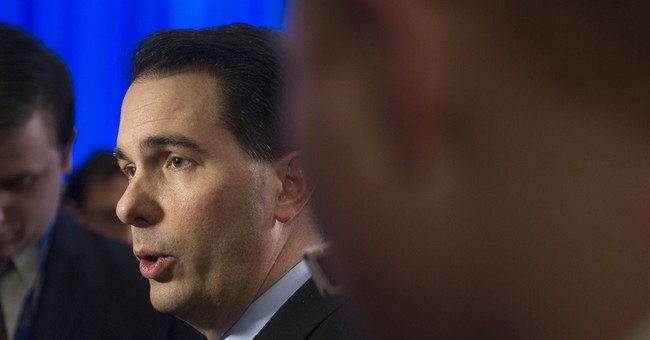 In his speech, he said he grew up as a “PK kid,” short for preacher’s kid. Walker explained how before he was born, his father, Pastor Llew, was a broadcaster between his college and seminary years. He was saddled with the graveyard shift that lasted from 12am-6am in Beloit, Wisconsin. Pastor Llew was also responsible for the farmer’s report.

Walker then discussed how his family moved from Colorado Springs, where they lived in the shadow of Pikes Peak to Plainfield, Iowa in 1970; a town with less than 500 people, according to the governor. He’s right. The town had a population of 430 at the time; Walker was 2 ½ years old.

The family soon moved to Delevan, Wisconsin, slightly larger with a population of 7,000, where Walker described his first job at 14 years of age, washing dishes at a restaurant called Country Side. He later said he moved to the “big time,” by flipping burgers at the local McDonald’s and saving up for college.

Just like in Plainfield, Iowa, his mother, Pat, ran Sunday school and also worked as a secretary. Walker was keen to show that his rise in the politics isn’t due to family connections, fame or fortune. His mother grew up not having indoor plumbing until high school.

Instead, he told the audience that he got something better from his family; a belief that “you can do and be anything you want" if you work hard and play by the rules.

As many of you already know, Scott Walker didn’t finish college. He left the spring semester of his senior year to work for the American Red Cross. From there he had a meteoric rise in Republican politics, going from the state legislature, county executive, governor, and a potential presidential candidate for the 2016 election.

Walker didn’t leave the stage without acknowledging the importance of family, noting that when you enter public life, so does your family. He and his wife, Tonette, recently celebrated their 22nd wedding anniversary–and he spoke highly of his sons Matt and Alex. He recalled why they named their first son Matthew (gift from God in Hebrew) because his wife was a widow and didn’t know if she would marry again, let alone have children. He went on to discuss his pro-life advocacy, in which he said it’s not enough to just say it, you have to get out there and show people that you care about them; Walker mentioned that he was president of the Marquette Students for Life chapter and supported people in difficult circumstances.

Before he exited the stage, he spoke about his PAC–American Revival–and how it will be the vehicle for rebuilding the American spirit and making sure there’s an avenue for social mobility for everyone. To do that, power must be diverted away from entrenched interests in Washington.

Now, the 500 lb. elephant in the room is his potential 2016 candidacy. Then again, Walker noticed that you have to be mentally ill to consider such a monumental task given what the dynamics of a national campaign does to a candidate and his family. He said one should only jump into the insanity if God is calling on you to do so.

But, Walker made it clear that he was “going to talk about what we are for:”

“Should we get in, we will talk about what we’re for, not what we’re against; I think Americans deserve a real debate and a real focus about where we’re going to take this nation; not what’s wrong with our primary opponents–or not what’s wrong with our general election opponent. You’ve seen in the media a lot of talk in the last few days about these self-manufactured ‘gotcha’ moments from the media, where they want to talk about things that I don’t think most American want to talk about. Our commitment is going forward; we’re going to talk about things that matter to every day Americans–and we’re going to leave the nonsense to the media on the side.”

The silliness from the media is derived from questions he was asked regarding evolution and President Obama’s religion; things that are extraneous to the vetting process concerning the presidency of the United States.

It’s the story of his family, his humble upbringing, and his faith, which isn’t discussed in a didactic tone; that has potential to connect with a vast audience.  He certainly could certainly tap into the fledgling neo-populist wave that's slowing gather steam across the country.

He’s also aware of his perception to the public given his preacher’s kid childhood. As Jason Stein at the Milwaukee Journal Sentinel wrote, this awareness gave the future governor invaluable preparation for his career in politics from his days in Plainfield, Iowa. Additionally, it’s a region of the state that isn’t decidedly conservative; it’s purple just like Wisconsin:

The church and parsonage were both a geographic and a social hub in the community.

Living on the main street as the child of a pastor was like growing up in a "fishbowl," as Scott Walker himself would later put it, and it taught the boy to be aware of how others saw him. It was an apt preparation for the future politician who would later relish radio and television interviews and tweeting about meals and other ephemera of his personal life.

Like the Milwaukee metro area and Wisconsin in general, Plainfield and the surrounding region of northeastern Iowa aren't one-sided in their politics. Its state senator is a Democrat, its state representative is a Republican. Its current congressman is Republican Rod Blum, who in November won a close race to replace outgoing Democrat Bruce Braley.

Scott Walker would leave Plainfield in the third grade, but already the family's civic sense was rubbing off on him. Betty Balsley, Joan Marlette and Janice Dietz [locals of Plainfield] remembered the boy starting a "Jesus USA Club" to do good deeds and seek donations for a new flag for the Plainfield City Hall.

The Balsley and Dietz families, both particularly close to the Walkers, said they weren't surprised that Walker ended up in politics.

"He would occasionally come up with comments," Betty Balsley said, remembering a boy who took note of the big world beyond Plainfield. "You just had a feeling that he would go to school and do something."

"There was an interest there," her husband Larry added.

As he ended his speech, Walker asked that attendees pray for him and his family and all the potential candidates–Democratic and Republican–because there is nothing more powerful than prayer to help you get through those difficult moments in life.