Jeb Bush Has a 25 Percent Chance of Winning the Nomination 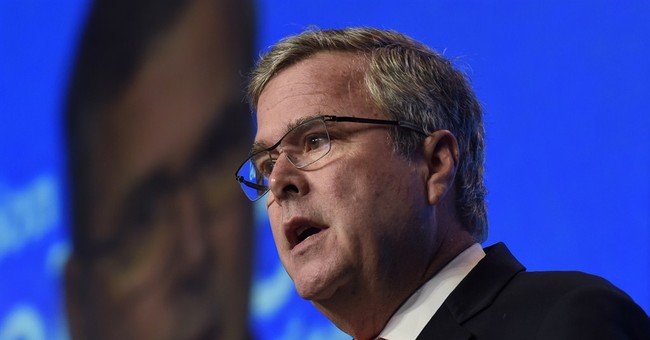 As Jeb Bush makes moves that could signal a 2016 presidential run, he has the conservative wing of the Republican Party either rolling their eyes or seething in anger. Besides policy, I can see why some voters think that it's getting a bit old that only a Bush or a Clinton are seen as the only options to win the presidency. Moreover, both of their respective political parties have moved either more conservative or progressive since the last time a member of their families occupied the White House. Right now, Bush has a 25 percent chance of winning the GOP nomination.

Nate Silver asked if Bush was too liberal to win. In short, he found that Jeb's more conservative than Jon Huntsman, but not as conservative as his brother, former President George W. Bush; he’s more like Bush 41.

Silver constructed an ideological map calculating voting records and public statements from candidates. A candidate close to zero on the scale indicates a moderate streak, while those closer to 100 are hardcore conservatives. Yet, as with any data collection, it’s not a perfect method. For example, Silver admitted that this model makes it hard to gauge a Republican with some libertarian leanings, like Rand Paul (via FiveThirtyEight):

Bush scores at a 37 on this scale, similar to Romney and McCain, each of whom scored a 39. He’s much more conservative than Huntsman, who rates at a 17.

Still, Bush is more like his father, George H.W. Bush, who rates as a 33, than his brother George W. Bush, who scores a 46. And the Republican Party has moved to the right since both Poppy and Dubya were elected. The average Republican member in the 2013-14 Congress rated a 51 on this scale, more in line with potential candidates Marco Rubio, Paul Ryan and Mike Huckabee.

So as a rough cut, Bush is not especially moderate by the standard of recent GOP nominees. But the gap has nevertheless widened between Bush and the rest of his party.

On the two issues where he has most outspokenly deviated from his party, immigration and education, his policy positions are not far removed from those Republican voters declare in polls. But these issues may also take on symbolic significance beyond their immediate policy implications, signaling to Republican voters that a candidate is too moderate or too much a part of the establishment. Earlier this year, my colleague Harry Enten found Republican senators who have adopted Bush’s moderate stance on immigration have been especially likely to receive primary challenges.

Betting markets put Bush’s chances of winning the Republican nomination at 20 percent to 25 percent, which seems as reasonable an estimate as any. You can get there by assuming there’s a 50 percent chance that he survives the “invisible primary” and the early-voting states intact and a 40 percent to 50 percent chance that he wins the nomination if he does. It’s a strategy that worked well enough for McCain and Romney.

Yet, Silver added, “[P]arties have shown some historical tendency to nominate successively more moderate candidates the longer they’ve been out of the White House. That could help Bush.”

That depends. Bush’s last successful election was when Floridians sent him back to the governor’s mansion in 2002. By 2016, that gap between successful elections, or re-elections, will be 14 years. The last time a U.S. president was elected with a gap that large was 150 years ago with Abraham Lincoln; he won his congressional race in 1846, served one term, and didn’t win another race until the presidential election of 1860.

Yet, there are still problems with this possible presidential bid, though it would probably be different than Romney’s coalition. And Bush, unlike Romney, could fare better with evangelicals, except immigration and Common Core split them right down the middle:

Bush, of course, would be following in the footsteps of his brother, George W. Bush, who was beloved by evangelicals and rode them to victory in 2004. Today, evangelical leaders are split on Common Core and immigration, and Jeb Bush has been steadfast in his opposition to abortion and same-sex marriage. Now, Bush is Catholic and not evangelical, but being Catholic didn’t stop Rick Santorum from winning a median of 36 percent of the evangelical vote in the 2012 primary compared to just 28 percent overall, according to 2012 entrance- and exit-poll states.

So, what does this mean for Bush in 2016? If he were to run (and he hasn’t said for sure that he will), Bush would probably have a different coalition than Romney’s. Bush could perform better in states where evangelicals make up a high percentage of the electorate, including Iowa, while he might not be in strong in states with a big tea party presence and less of a social base, such as Arizona.