Should There Have Been Charges Filed In The Eric Garner Case? 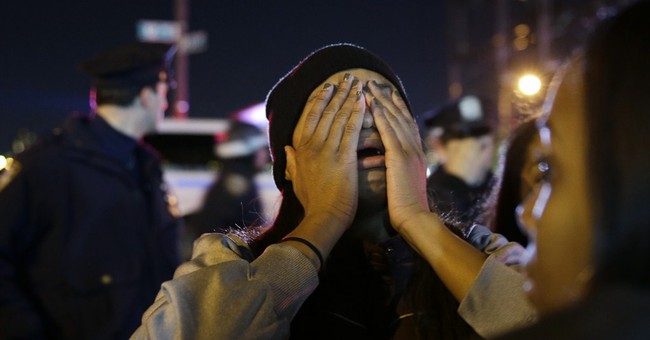 The past few weeks have not been kind to law enforcement. Grand juries from Ferguson, Missouri and Staten Island, New York decided not to file charges against Officer Darren Wilson in Missouri and the officers involved in the death of Eric Garner in New York.

While the officers in both cases have been cleared, it’s been a public relations nightmare for police. Unlike Ferguson, there is video evidence of the events that led to Eric Garner’s death–and it’s horrifying to watch.

The 22-person Staten Island grand jury (13 to 14 members being white and nine to 10 being black or Hispanic) reviewed the case for more four months–and heard testimony from 22 witnesses.

The medical examiner ruled that Eric Garner’s death was a homicide, citing the chokehold and compression of the chest as the cause of death; Garner’s obesity, high blood pressure, and asthma were listed as contributing factors as well.

Concerning the chokehold, it’s a move that’s been prohibited by the New York Police Department since 1993, but it’s not illegal (via New York Observer):

Chokeholds may be prohibited by the NYPD rule book, but they aren’t actually illegal — and Councilman Rory Lancman is looking to change that.

But he won’t find support from Police Commissioner Bill Bratton, who said today he doesn’t believe it’s necessary to criminalize the highly controversial procedure that a medical examiner ruled caused the death of Eric Garner, 43, in police custody.

“Would you support legislation that would make it illegal for an officer or anyone to perform this incredibly dangerous maneuver?” Mr. Lancman asked Mr. Bratton during a Council hearing today.

“I would not,” Mr. Bratton answered shortly.

“I feel that department policies are sufficient. But if lawmakers want to try to make that against the law, good luck, but I won’t support it,” Mr. Bratton said.

The exchange came after Mr. Bratton previously objected to Councilman Corey Johnson calling chokeholds illegal in a question about why so few officers had been punished for allegations of using the maneuver — banned by NYPD rules since 1993.

“Chokeholds are not illegal. They are not against the law,” Mr. Bratton noted.

Also, unlike Officer Darren Wilson in Ferguson, the police officer who put Garner in a chokehold, Daniel Pantaleo, has had civil rights lawsuits filed against him…twice (via New York Magazine):

Yet, the article also mentioned that the odds that Pantaleo losing his job, or being suspended, are "slim," although he has been reassigned since the Garner case.

Pantaleo testified to the grand jury, saying he meant no harm when trying to arrest Mr. Garner on the suspicion of selling illegal cigarettes (via NYT):

The officer tackled some of the most damaging evidence head-on. He acknowledged that he heard Mr. Garner saying, “I can’t breathe, I can’t breathe,” and insisted that he tried to disengage as quickly as he could, according to his lawyer, Stuart London. At the same time, Mr. Garner’s ability to speak, the officer testified, suggested that he, in fact, could breathe.

His testimony, on Nov. 21, seems to have swayed the grand jurors who, on Wednesday, decided not to charge him with a crime. But the officer’s testimony, as recounted by Mr. London [Stuart London, Pantaleo's attorney], seemed at times to be at odds with a video of the encounter, such as his stated attempt to get off Mr. Garner “as quick as he could.”

“He testified that the glass buckled while Garner was up against him and he was against the glass,” Mr. London said. “He was concerned that both he and Garner would go through that glass.”

On the video, the men toppled to the ground, but the arm around Mr. Garner’s neck did not appear to move. Officer Pantaleo told jurors he continued to hold on to Mr. Garner as he struggled to regain his balance, Mr. London said. He said he wanted to make sure that Mr. Garner was not injured by other officers rushing in, as well as to prevent Mr. Garner from possibly biting one of them.

The most brutal part of the video is the one shot after officers had subdued Garner; he lays there motionless on the sidewalk. When EMTs arrive, not a single one performs CPR on Garner. The fallout led to them being suspended without pay. Yet, it appears that Garner is still alive, as one of the EMTs feels his neck to find a pulse; Garner would die about an hour later.

Now, with Ferguson, the physical evidence seemed to have corroborated Officer Wilson’s account of the events that led to him shooting Michael Brown; Dorian Johnson, the man who was with Brown at the time of the incident, plead guilty to filing a false police report in 2011, and there were numerous instances where testimonies by the witnesses were "inconsistent, fabricated, or provably wrong." Oh, and the autopsy found no bullet wounds in Michael Brown’s back.

In key ways, though, the two incidents were different: The killing of Eric Garner was caught on video; Garner didn’t put the cops in fear for their lives; and the chokehold used by Officer Daniel Pantaleo that killed Garner, who was asthmatic (you’ll hear him wheezing “I can’t breathe” repeatedly in the clip), is banned under the NYPD’s own guidelines. Pantaleo was stripped of his gun and put on desk duty after the incident as a preliminary punishment. This summer, a Quinnipiac poll found that 64 percent of New Yorkers thought he should face some kind of charges for Garner’s death.

The Eric Garner murder is pretty much slam-dunk second-degree manslaughter at the very least. But hey: Two Americas. pic.twitter.com/ll6apG3CIO

Sean Davis, co-founder of The Federalist, says that the threshold for Pantaleo to be charged with second-degree manslaughter was a “slam-dunk." The use of the banned chokehold move shows that the NYPD knew the move was reckless, hence fitting with the charge at hand–and it only takes a simple majority to indict.

Additionally, Reason’s Nick Gillespie makes a good point that perhaps we should reform the laws that led to Garner’s death, particularly government taxes on cigarettes:

Yet clearly something has gone horribly wrong when a man lies dead after being confronted for selling cigarettes to willing buyers. Especially since, as even Bratton has acknowledged, the chokehold applied by the restraining officer is prohibited by the NYPD’s own rulebook. Does the commissioner really control his officers, and is it time to rethink nanny state policies that create flourishing underground markets?

The combination of an unruly and disobedient people, an excess of small rules, and a willingness to enforce the law can be disastrous.

The state is force. This is another good example of why there should be few laws, and why that force should be used in few circumstances.

Gillespie noted that while New York’s taxes on cigarettes has gone up 150 percent; smuggling has also increased 59 percent.

What is a little troubling is the conservative reaction to defend the police immediately after such cases like these break on the news. As A.J. Delgaldo wrote in National Review last summer, using the Garner case as a prime example; it’s time for conservatives’ “unconditional love affair with the police to end:”

An e-mailer just told me to pipe down about Eric Garner since the head of the police union said everything was legit. Best one today by far.

Let’s get the obligatory disclaimer out of the way: Yes, many police officers do heroic works and, yes, many are upstanding individuals who serve the community bravely and capably.

But respecting good police work means being willing to speak out against civil-liberties-breaking thugs who shrug their shoulders after brutalizing citizens.

On Thursday in Staten Island, an asthmatic 43-year-old father of six, Eric Garner, died after a group of policemen descended on him, placing him in a chokehold while attempting to arrest him for allegedly selling cigarettes. A bystander managed to capture video in which Garner clearly cries out, “I can’t breathe!” Even after releasing the chokehold (chokeholds, incidentally, are prohibited by NYPD protocol), the same officer then proceeds to shove and hold Garner’s face against the ground, applying his body weight and pressure on Garner, ignoring Garner’s pleas that he cannot breathe. Worse yet, new video shows at least eight officers standing around Garner’s lifeless, unconscious body.

Who can defend this?

And police-department Internal Affairs divisions are nearly as concerning as the cops themselves. Last week, a Miami police officer witnessed a car driving at high speeds in a pedestrian area. When he pulled the car over, the indignant driver stormed out. “Don’t you know the [expletive] I am?” the driver barked. It turns out that the driver was a police lieutenant within . . . Internal Affairs. The department in charge of ensuring proper police behavior consists of gents like this, whose first response is to assume that cops, like members of Congress, are above the law. What happened to the lieutenant? He has been transferred to “Special Investigations,” which, as a local NBC reporter points out, is more a promotion than a punishment.

Police wrongly entering private property with no right to do so and causing death? Check! Last month, an officer in Utah, while searching for a three-year-old reported missing by his family (he was later found hiding in his own home’s basement), took it upon himself to enter the private backyard of a neighborhood home without a warrant — in clear violation of the homeowner’s Fourth Amendment rights (officers are only allowed to chuck the warrant requirement if a crime is occurring where time is of the essence). The officer — who had about as much courage as I did in gym class — was approached by the homeowner’s dog and, rather than retreat or fire at the dog’s leg, shot the dog point-blank in the head. The reaction of the Salt Lake City Police Department was to defend the officer, claiming he had a right to shoot as he was in fear for his life, and made no mention of why the officer entered private property without a warrant in the first place. Anyone who believes in upholding the Constitution should be outraged. Next time, it can just as easily be a young boy who points a toy gun at an officer, a confused elderly person, or even you.

Last month in Georgia, a SWAT team’s flash grenade landed in a baby boy’s crib. Worth noting: It was even the wrong house.

The Staten Island DA could establish another grand jury to look at the evidence again, but for now; the Department of Justice is opening a civil rights investigation–and Garner’s family is most certainly going to file a lawsuit with the city and the NYPD.

At the same time, we still don't know the charges that were brought before the grand jury to consider.

I hope we get some reporting - which I haven't seen so far - on what charges were requested in Garner case, despite GJ secrecy rules.

I don't like Eric Holder, and in general don't approve of Feds doubling up, but the Eric Garner case merits it. This needs a U.S. Attorney.

There's also nothing, aside from just not wanting to, preventing a NY court from empaneling another grand jury. It's not just in DA's hands.