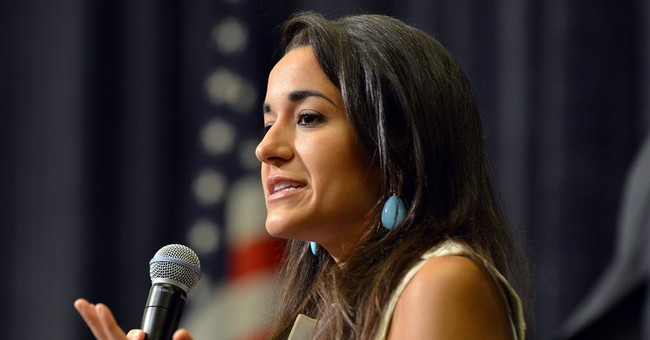 Earlier this week, New Hampshire State Rep. Marilinda Garcia had a debate with incumbent Democratic Congresswoman Annie Kuster on the radio. Okay, Rep. Kuster declined, but her Republican opponent showed up. Kuster has yet to hold one town hall event since she her 2012 election win–and it seems she isn’t going to hold any in the last weeks of the the 2014 cycle.

Recently, the Garcia campaign has launched a timeline called “When Annie Met Obama,” which documents her greatest hits from announcing that she is one of the president’s strongest supporters in Congress to her recent snags over her property taxes.

Atlas CEO Stephen D. Pelkey did most of the talking, showing Garcia the equipment and electronics the company uses to make the fireworks they display at venues from the Cheshire Fairgrounds in North Swanzey to Gillette Stadium in Foxborough, Mass.

About 10 of the company’s employees accompanied them on the tour.

Pelkey said he supports Garcia because he’s frustrated with Democratic lawmakers who he said ignore the interests of small businesses.

Several years ago, Atlas was at risk of losing its license to transport its fireworks over what Pelkey said were violations incorrectly cited under the federal Hazardous Materials Safety Permit Program.

At the time, Pelkey attempted to get help from Democratic Rep. Ann M. Kuster, the incumbent defending her 2nd Congressional District seat against Garcia in the Nov. 4 election.

Pelkey said he didn’t get an answer from Kuster, leading him to place his faith in Republican candidates.

“It was as if small business in New Hampshire didn’t exist, or wasn’t important.”

Well, Pelkey, and other New Hampshire voters in the second congressional district, will have their chance to voice their concerns about the issues that matter to them most with Rep. Garcia. She’s planning five town halls in five weeks, according to her communications director Ken Cunningham:

“In honoring a New Hampshire tradition and the expectations of integrity and openness from our candidates, Marilinda Garcia will host 5 townhall meetings in New Hampshire’s Second District before Election Day, starting on October 7th, in Littleton. These townhall meetings will offer voters an honest opportunity to interact one-on-one with Marilinda and discuss with her the important issues facing our state and our nation.”

“Although Ann Kuster has yet to respond to our request to participate in a townhall forum, we would like to renew our invitation to her, and urge her to attend any of the below townhall meetings. We see no reason for her to miss these valuable opportunities to meet with the people of New Hampshire, and thus we will be prepared for her participation in every forum.”

“Additionally, we have provided directions to each meeting for Ann Kuster, and we are more than willing to facilitate her travel arrangements so that she is finally able to participate in a townhall meeting. Ann Kuster has never held a townhall meeting and her constituents deserve the opportunity to share their concerns and views with their representative to Congress.”

The tour begins October 9 in Littleton, NH. The subject of this town hall will be health care.

On October 15, John Bolton, former U.N. Ambassador under the Bush Administration, will be a guest in a town hall devoted to national security in Hanover.

Taxes and regulations will be the focus for the Keene town hall on October 21, while Concord will delve into government spending on the 29th.

The last town hall event will be held in Nashua to discuss jobs and the economy on November 3, the day before Election Day.