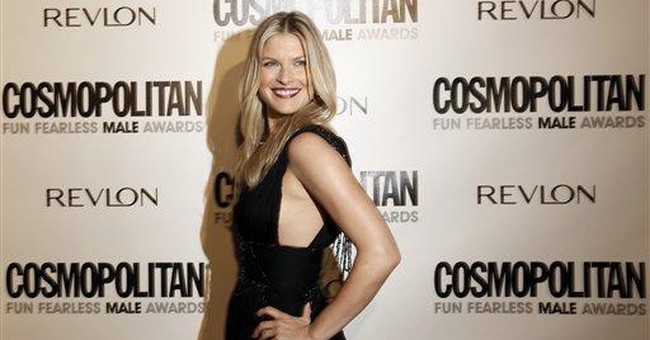 As conservatives grapple with how to reach single women voters, maybe we should utilize our entrepreneurial skills and start buying–or launching– websites that cater to them. Republicans can surely compete with Democrats when it comes to women voters; they’re a shiftable voting bloc. But in the wake of Mitt Romney’s 2012 defeat, Glenn Reynolds, aka Instapundit, observed that conservatives have little in the arsenal regarding women’s media:

One of the groups with whom Romney did worst was female “low-information voters.” Those are women who don’t really follow politics, and vote based on a vague sense of who’s mean and who’s nice, who’s cool and who’s uncool.

Since, by definition, they don’t pay much attention to political news, they get this sense from what they do read. And for many, that’s traditional women’s magazines — Redbook, Cosmopolitan, Glamour, the Ladies Home Journal, etc. — and the newer women’s sites like YourTango, The Frisky, Yahoo! Shine, and the like.

The thing is, those magazines and Web sites see themselves, pretty consciously, as a propaganda arm of the Democratic Party. So while nine out of 10 articles may be the usual stuff on sex, diet and shopping, the 10th will always be either soft p.r. for the Democrats or soft — or sometimes not-so-soft — hits on Republicans.

When a flier about getting away with rape was found in a college men’s bathroom, the women’s site YourTango (“Your Best Love Life”) led with the fact that the college was Paul Ryan’s alma materin a transparent effort to advance the Democrats’ War on Women claim that Republicans are somehow pro-rape. A companion article was “12 Hot Older Men Who Endorse President Obama.”

For the pro-Republican stuff, well, just visit the “Real Mitt Romney” page at snopes.com, or look up the time Mitt Romney rescued a 14-year-old kidnap victim, to see the kind of feel-good stories that could have been running. For the others, well, it would run articles on whether Bill Clinton should get a pass on his affairs, whether it’s right that the Obama White House pays women less than men, and reports on how the tax system punishes women.

Reynolds noted how Sheldon Adelson doled out $150 million during the 2012 cycle. That’s a lot of magazines or new sites that could have been bought or created. Also, the magazines he listed, Glamour, Cosmopolitan, and Ladies’ Home Journal (although they’re now mostly digital, only releasing their editions on a quarterly basis), are the top 25 magazines in the country by circulation. Let’s also not forget the web traffic and social media reach these magazines receive as well; Cosmopolitan has over a million people following them on Twitter alone.  Even Playboy is disseminating “click bait” to drive traffic.

When even Playboy is putting out feminist click-bait, you know content producers know that ladies drive traffic.

Recently, Cosmopolitan announced they’re heading into the trenches for the 2014 midterms. Starting on September 8, and every week after that until Election Day, the editors at the magazine will endorse candidates running in this year’s senate, congressional, and gubernatorial races. They’ll mostly concentrate on candidates in competitive races. Cosmo’s senior political writer–and left-leaning feminist–Jill Filipovic will be the point person conducting interviews with the candidates. Oh, and you have to be liberal to garner the adoration of the editorial board (via Politico) [emphasis mine]:

Amy Odell, Cosmopolitan.com’s editor and the leader of the politics effort, said she’s aiming to make the midterm elections fun and not “boring and difficult to understand.” A social media campaign will kick things off with a “Save the Date” for Election Day featuring a photo of Beyoncé with American flag nails.

Obviously it’s important if we’re encouraging our readers to vote for them to get to know the candidates,” Odell said. “[W]e’re going to find a fun way to highlight candidates we’re excited about, so when our readers go to the polls they know who they should be looking to vote for.”

The Cosmo endorsement criteria fall squarely into the liberal camp — equal pay, pro-choice, pro-birth control coverage, anti-restrictive voter-ID laws. Asked how a candidate who might line up on certain issues like equal pay but is pro-life would fare, Odell said that would be a deal breaker.

“We’re not going to endorse someone who is pro-life because that’s not in our readers’ best interest,” Odell said. “[P]eople say that’s a liberal thing, but in our minds its not about liberal or conservative, it’s about women having rights, and particularly with health care because that is so important. All young women deserve affordable easy access to health care, and that might include terminating a pregnancy, and that’s OK.”

“We’re looking very carefully at candidates who we feel will be in seats that are swing seats or we feel very strongly about the issues they stand for,” Coles said. “Access to health care and access to contraception or abortion if, god forbid, you need one, and equal pay for equal work. And there may be some gun control issues, which is also something we believe in, responsibility for gun owners. If there are candidates who are in favor of 9-year-old girls shooting Uzis at a theme park — we are not in favor of those candidates.”

Huh? Theme parks? You see this is the stuff that really isn’t being challenged or debunked on our end. The political left has a quasi-monopoly in this slice of media.  This is a serious effort; it’s time conservatives start competing.

Q for those criticizing @Cosmopolitan for endorsing pro-choicers: Are there pols who are anti-choice but GREAT on all other women's issues?

As far as I can tell, politicians who oppose abortion rights also tend to oppose contraception, equal pay & gender equality. Because duh.