How Hamas Blew It 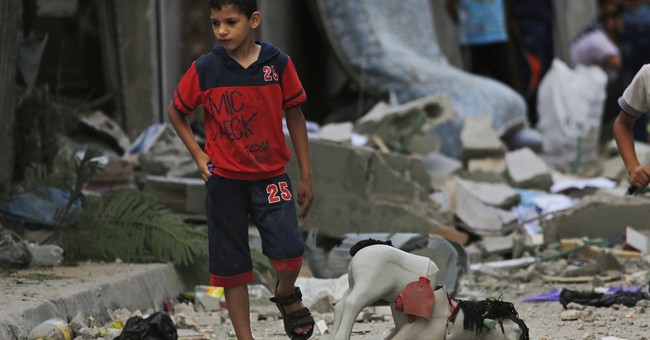 Last week, Nathan Thrall wrote in the New York Times (surprise!) that basically Israel and the West are to blame for the situation in Gaza. He wrote, “The current escalation in Gaza is a direct result of the choice by Israel and the West to obstruct the implementation of the April 2014 Palestinian reconciliation agreement. The road out of the crisis is a reversal of that policy.”

Does that warrant Hamas firing rockets into Israel? Oh wait; Hamas is a terrorist organization with an expressed goal of destroying Israel. So, yeah, I guess it fits the narrative.

On July 13, Jeffrey Goldberg wrote about why Gaza is in such a shambles – and how Hamas blew it:

Dead Palestinians represent a crucial propaganda victory for the nihilists of Hamas. It is perverse, but true. It is also the best possible explanation for Hamas’s behavior, because Hamas has no other plausible strategic goal here.

The men who run Hamas, engineers and doctors and lawyers by training, are smart enough to understand that though they wish to bring about the annihilation of the Jewish state and to replace it with a Muslim Brotherhood state (Hamas is the Palestinian branch of the Brotherhood), they are in no position to do so. Hamas is a militarily weak group, mostly friendless, that is firing rockets at the civilians of a powerful neighboring state.

There is no doubt that Hamas could protect Palestinian lives by ceasing its current campaign to end Israeli lives. The decision is Hamas’s. As the secretary-general of the United Nations, Ban Ki-moon, said earlier this week, "We face the risk of an all-out escalation in Israel and Gaza, with the threat of a ground offensive still palpable—and preventable only if Hamas stops rocket firing."

I understand that this latest round in the never-ending Israel-Gaza war was, in many ways, a mistake. Israel was uninterested in an all-out confrontation with Hamas at the moment, and Hamas, which is trying to manage a threat to its control of Gaza from—believe it or not—groups even more radical and nihilistic than it is, is particularly ill-prepared to confront Israel.

The politics of the moment are fascinating and dreadful, but what really interests me currently is a counterfactual: What if, nine years ago, when Israel withdrew its soldiers and settlers from Gaza, the Palestinians had made a different choice? What if they had chosen to build the nucleus of a state, rather than a series of subterranean rocket factories?

This thought is prompted by something a pair of Iraqi Kurdish leaders once told me. Iraqi Kurdistan is today on the cusp of independence. Like the Palestinians, the Kurds deserve a state. Unlike most of the Palestinian leadership, the Kurds have played a long and clever game to bring them to freedom.

This is what Barham Salih, the former prime minister of the Kurdistan Regional Government, told me years ago: “Compare us to other liberation movements around the world. We are very mature. We don’t engage in terror. We don’t condone extremist nationalist notions that can only burden our people. Please compare what we have achieved in the Kurdistan national-authority areas to the Palestinian national authority. … We have spent the last 10 years building a secular, democratic society, a civil society.” What, he asked, have the Palestinians built?

So too, Massoud Barzani, the president of the Kurdistan Regional Government, once told me this: “We had the opportunity to use terrorism against Baghdad. We chose not to.”

Goldberg added that Israel encouraged Gaza’s economic development; it didn’t blockade the Gaza Strip until it became known that it was being used as a launching pad for attacks against them. Additionally, Gaza is situated in place where it could’ve received billions in economic aid.

He also mentioned how some American Jewish donors paid $14 million for greenhouses left behind by expelled Israeli settlers and donated them to the Palestinian Authority. They were destroyed shortly afterwards.