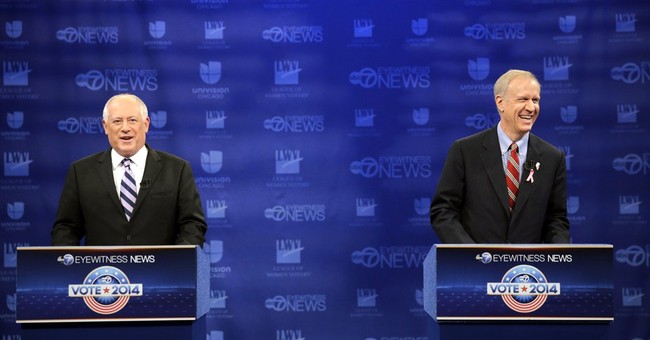 With Election Day just around the corner, the race between Democratic Gov. Pat Quinn and Republican challenger Bruce Rauner is a dead heat, according to a new Early & Often poll.

The survey, conducted Wednesday in live telephone interviews by McKeon & Associates, shows Quinn and Rauner each with 45 percent of the vote in southern Illinois — a segment of the state that’s traditionally more loyal to Republicans.

Statewide, the head-to-head numbers gave Quinn the edge with 45 percent, Rauner with 42 percent of the vote and Libertarian candidate Chad Grimm with 4 percent. Rauner held a strong lead in suburban Cook County and the collar counties as well as a 9-point lead in central Illinois.

The survey also showed Rauner with strong numbers in Chicago, garnering 20 percent, and among African-Americans, winning the support of 15 percent of black voters statewide.

“There is no doubt that this is a close race, but the idea that Bruce Rauner and Pat Quinn are tied Downstate is more far-fetched than the idea of a Pat Quinn tax cut,” Rauner campaign spokesman Mike Schrimpf told the Chicago Sun-Times.

Perhaps, but it’s important to remember that the billionaire has maintained that he has no “social agenda,” and has made assurances on the campaign trail that he’d protect abortion rights and would punt the same-sex marriage issue back to voters. Rather, his focus would be on jobs, taxes, fighting corruption, and schools, he’s said.

“There’s this kind of hypocrisy of being a liberal in Chicago and picking up some votes there and trying to sell as a conservative Downstate. It doesn’t work. And that’s his problem,” pollster Mike McKeon told the Sun-Times. “At the end of the day, he has to run close to [2010 GOP nominee Bill] Brady’s numbers to win Downstate … He was strong down there, he stuck to his conservative stuff and that was that. Either you’re pro-life or you’re pro-choice. There’s no dancing.”

More interesting is the split for the candidates among women, with Quinn pulling in 38 percent of the female vote, while 55 percent backed Rauner, the poll found. McKeon tied this to women being more interested in jobs and the economy rather than minimum wage and social issues.

We’ll find out soon enough who will come out on top in this extremely close race.