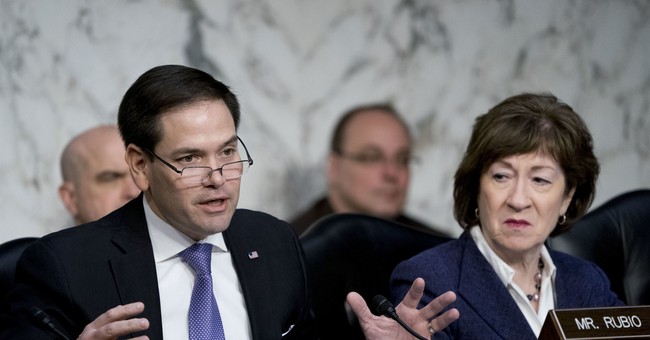 "What we're asking you to do, and I think what you've agreed to do, is to use the powers that you have within your platforms to crack down on certain users who are hostile actors, who are using disinformation or misinformation or hate speech for the purposes of sowing discord or interfering in our internal affairs,” Sen. Rubio began, “and that's a positive."

However, he then pointed out a potential issue with that crackdown when it comes to dealing with authoritarian regimes.

"What happens when an authoritarian regime asks you to do that, because their definition of disinformation or misinformation could actually be the truth?” he asked. “Their discord, or what they define as discord, could be things like defending human rights."

Sandberg emphasized in reply that "we support these principles around the world," and pointed out that Facebook does not turn over information about dissenters to hostile governments, including in China.

Rubio went on to cite specific instances of governments attempting to use social media to target dissenters, including Pakistan’s request that over 1,000 accounts be blocked over Muslim blasphemy complaints.

He also brought up Turkey asking Twitter to block the accounts of journalists and an NBA player, asking Dorsey how that was “in keeping with the core tenet of freedom with expression?”

Dorsey explained Twitter’s policy of "per country content take down," meaning that the content can’t be seen in a specific country but is viewable everywhere else in the world.

"The world can still have a conversation around what's happening in a market like Turkey," he explained. "We would like to fight for every single person being able to speak freely and see everything, but we have to realize that it's going to take some bridges to get there."

Former UN human rights chief Zeid Ra’ad al-Hussein said last week that Facebook had “allowed its platform to be used to incite violence against the Rohingya Muslim minority in Myanmar, where UN experts say a military crackdown had ‘genocidal intent.’”

Google, was harshly criticized for refusing to send a representative to the Senate Intelligence Committee hearing Wednesday.

Sen. Tom Cotton (R­­-AR) also blasted them for their cooperation with the Chinese communist party.

“Perhaps Google didn’t send a senior executive today because they’ve recently taken actions such as terminating cooperation with the American military…at the very same time that they continue to cooperate with the Chinese communist party,” Cotton said. “Perhaps they didn’t send a witness to answer these questions because there is no answer to those questions.”

Sandberg and Dorsey confirmed that they would not take similar actions to Google in that respect.