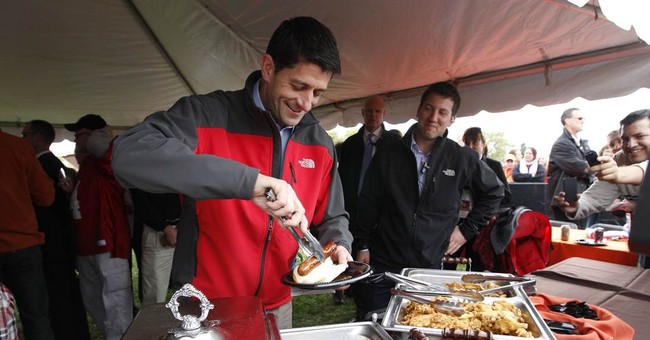 A new poll by Fusion.com says that Millennials are ready for a Paul Ryan, Hillary Clinton brawl in 2016. Considering the overwhelming support for President Obama in 08' and 12', votes from twenty/thirty-somethings are an important voting bloc.

Hillary was a shoe-in for Democrat Millennials with 48 percent saying she would get their vote. Those findings are somewhat obvious, but what is a little frightening is the poll found second and third place going to Joe Biden at 13 percent and Elizabeth Warren (didn't see that one coming) at nine percent.

Congressman Paul Ryan (R-WI) leads the poll amongst Republican voters. 16 percent would vote for Ryan, eleven percent chose Jeb Bush, and 9 percent chose Rand Paul. What about Senator Ted Cruz (R-Texas)? He might be a little too conservative, considering that many Millennials are swayed by social issues, particularly same-sex marriage. This is part of how President Obama got elected and reelected.

Paul Ryan is enthusiastic. He's a strong leader with ideas that are hard to object to regarding poverty and growing the economy. He's young -- or at least younger, I should say. If he wins the presidency, he would be 45 years old. Hillary, on the other hand, would be 69 years old at her inauguration.

The poll was consistent with Millennial's liberal views on social issues that distract from problems such as terrorism and the debt crisis:

Here are some other findings from Fusion:

Paul Ryan may be a candidate who could attract compete for significant support from Millennials. He has a sincere desire to change the direction of the country for the better and is passionate about the things Millennials care about and should care about. The only thing he may want to avoid doing is another exercise photo shoot where he looks, well, awkward. Though, nothing could out do Hillary's hilarious Russian "reset button" blunder.