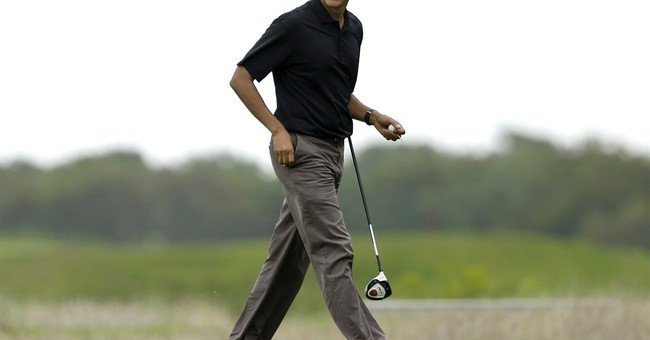 George W. Bush was frequently mocked for his leisure trips during his presidency, but President Obama may have taken it to a new level with his golfing trips.

As The Hill reports, President Obama's trip to Hawaii this year is a part of a vacation he's been taking since before he was President - and he hasn't discontinued that while having the office of perhaps the most prestigious, stressful job in the country:

He arrived on Tuesday morning at the golf course at Marine Corps Base Hawaii, according to a pool report. He is playing with his high school friends Greg Orme and Bobby Titcomb, as well as staffer Joe Paulsen.

Titcomb and Orme are part of a group of Obama's friends who reunite in Hawaii every year, a practice that continued even after Obama became president.

Obama also made golf outings, which opponents have criticized throughout his presidency, on Saturday and Sunday, the first two days of the break.

This isn't to say that Presidents can or should never take vacations. But it's to point out that President Obama is almost never criticized for his own refusal to yield on vacations by the mainstream media, while it was a firestorm of controversy for his predecessor.