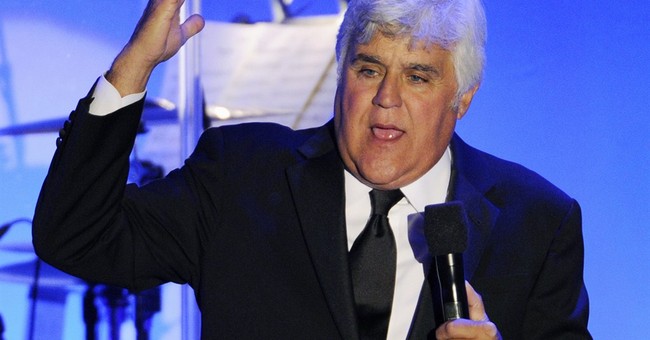 Comedian Jay Leno was scheduled to perform at the annual National Shooting Sports Foundation 2015 SHOT Show in Las Vegas on January 20, but after unwarranted pressure from Michael Bloomberg's anti-gun goons, Leno has dropped out despite hundreds of tickets to his event already being sold.

"We are clearly disappointed by Jay Leno's decision not to perform at the 2015 SHOT Show State of the Industry Dinner. He unilaterally cancelled his promised appearance due to pressure from the anti-gun lobby, which included false statements about our industry and its commitment to genuine firearms safety, which we attempted to personally correct with him, but to no avail. We are not deterred by their publicity seeking nor are we unfamiliar with the bullying political tactics of the gun control groups that seem to have as little respect for the First Amendment as they continually demonstrate with regard to the Second Amendment," NSSF released in a statement late last night. "We are proud of the many programs that we run that meaningfully contribute to public safety including our long standing Project ChildSafe and Don't Lie for the Other Guy initiatives in addition to our members everyday work in compliance with comprehensive federal and state laws. We will not allow the lawful commerce in firearms nor our industry to be demonized and we will continue to speak out for the Second Amendment rights of the millions of law-abiding citizens who are our customers. Despite Mr. Leno's cancellation, we look forward to having our biggest and best State of the Industry Dinner to date with a performer that respects the contributions of our industry and the customers it supports."


A record number of people attended the 2014 SHOT Show and pumped $73 million into the local Las Vegas economy over the course of just a few days. In partnership with the PGA the annual NSSF charity golf event, Birdies for the Brave, raised $100,000 for military homefront groups.


The 2014 Shooting, Hunting and Outdoor Trade Show in Las Vegas has come to an end and this year was the most popular year yet. According numbers released Friday from the National Shooting Sports Foundation, a record 67,000 people attended this year's show, beating last year's numbers by 5,000. The event pumped $73 million into the Las Vegas economy. More than 1600 companies participated in the week long event, filling up 13-acres of space.


Earlier this year, Penn & Teller performed at the State of the Industry dinner and were a hit. It's a shame Leno let dishonest and elitist liberal stooges bully him into bailing out on a great event with some of America's best people. I look forward to NSSF finding a replacement for the 2015 show.