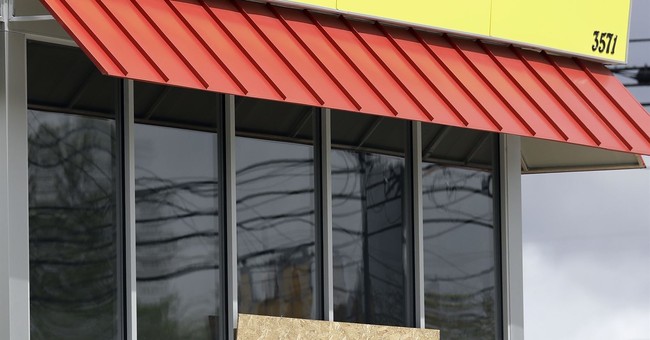 Since we've been writing about defensive gun uses within the context of the broader debate over gun restrictions lately, this story caught my attention.  It also seems particularly relevant in light of the horrible shooting at a Tennessee Waffle House a few days ago, which was interrupted by the heroics of an unarmed man (for whom strangers have now raised more than $170,000).  Some on the anti-gun Left decided that it would be a useful argument to highlight the incredible case of James Shaw, Jr. as a means of rebutting the 'good guy with a gun' argument from supporters of the Second Amendment.  That was an unserious and nonsensical point, but they made it anyway.  Which brings us to an incident that occurred at a Waffle House in Louisiana a few days ago -- and I'd wager that only a tiny fraction of those familiar with the Tennessee incident have heard about this one:

On Friday two armed men tried to rob a Louisiana Waffle House but were shot by an armed patron. One of the robbers was hospitalized. Nobody else was hurt. https://t.co/vPDFvWf9CL

Ernest Thomas was arrested on one count of armed robbery and one count of attempted armed robbery, but remains in the hospital as he recovers from gunshot wounds, NOPD said. Around 10:19 p.m. Thursday, Thomas and another man with semiautomatic handguns entered the Waffle House in the 2900 block of Elysian Fields Avenue, police said. The other man jumped the counter and demanded money from the cashier, while also taking $8 from a costumer, according to an NOPD release Friday afternoon. Thomas stood on the side by the counter and served as lookout for the other man. A customer armed with his personal firearm drew his weapon as the other robber approached him, causing the robber to flee. Thomas then pointed his own weapon at the armed customer, the police release said. The customer fired several shots at Thomas, who then ran out of the Waffle House and fled in a white Chrysler with the other robber. The customer later told police that he believed he had struck Thomas. Later in the night, a white Chrysler pulled up at a local emergency room and dropped off a man with several gunshot wounds to the back, hip and arm. The man matched witness descriptions of the injured robber, according to the release.

This unnamed, law-abiding, armed customer thwarted an armed robbery in progress -- and possibly saved lives -- by exercising his rights.  This incident will be recorded as one of the many annual instances (between 100,000 on the extreme low end, to 2.5 million on the higher end) of Americans defending themselves or their property with firearms.  And as extraordinary and special as Mr. Shaw's actions were, what are the chances the Louisiana crime, with two armed perpetrators, could have been stopped by a single unarmed man?  I'd bet the managers, employees and patrons of that restaurant are very grateful that a good guy with a gun was eating in the dining room that night.  Meanwhile, I know Matt covered this earlier, but my goodness, this is some very ugly stuff being directed at Parkland survivor Kyle Kashuv by one of his own teachers:

So... I just got a call from a friend of mine from @GregPittman1957's class and he apparently compared me to Hitler in class and said I am a piece of crap. The rant was about 10-minutes during class time and how he was right and I was wrong with my comments...

A second student has apparently corroborated the rant:

I can't begin to describe how wildly inappropriate it is for any teacher to be publicly badmouthing any student to his classmates, particularly behind his back.  It gets even worse, given the context.  Kashuv is a survivor like the rest of those students -- and for a history teacher to invoke any sort of Hitler comparison (even if jest), especially about the Jewish son of Israeli parents, is egregious professional misconduct.  That misconduct is made even worse if it's true that this teacher was instructed by administrators to stop engaging Kashuv on social media before uncorking this diatribe, and the "something needs to be done about him" piece could be construed as a threat.  I understand that tensions are high on that campus.  That community went through something horrific.  But it's not remotely acceptable for a teacher to respond to his own political differences with a student in this manner.  His actions merit some form of formal sanction.