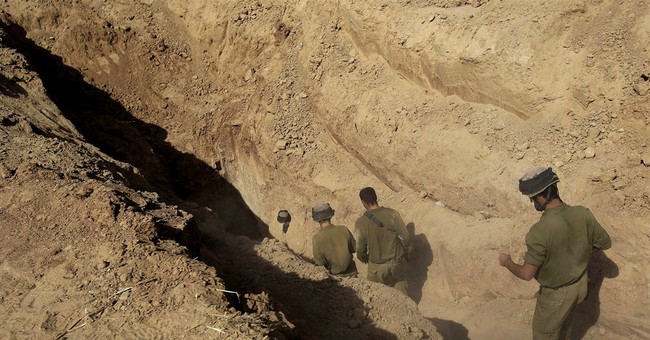 UPDATE - As Katie noted earlier, Hamas violated the 72-hour ceasefire almost immediately today, allegedly using a tunnel attack to kill to IDF soldiers and claiming to have captured a third. Israel has confirmed the abduction.


NBC News has come under sharp criticism from Israeli officials this week after one of its reporters falsely reported that attacks on a hospital and a refugee camp in Gaza came from Israeli drones. In fact, the shells were (mis)fired by Hamas, and were intended for Israeli civilians. The terrorist organization's incompetence killed their own people. The international media is also running Israel through the ringer over a terrible incident involving the shelling of a UN school, killing children. Israel's ambassador to the US, Ron Dermer, eloquently explained his country's position on the attack to Megyn Kelly last night, responding to the White House's statement that it was "totally indefensible." Dermer explained that no one has the full context of the incident yet, while readily conceding that the deaths of children is "heart-wrenching." He correctly and repeatedly returned his focus to the question of who is responsible for the violence and the ongoing war. He also noted that Hamas rockets have been discovered in UN-administered schools on three occasions over the last two weeks. A building marked as a UN-run health clinic was also discovered to have housed the entrance to one of Hamas' tunnels. When IDF soldiers arrived to clear and destroy the tunnel, it was booby-trapped and three Israelis were killed, according to the Times of Israel. As Hamas has been busy executing accused "collaborators," shooting Palestinian anti-war protesters, and threatening journalists, Israel has been shipping hundreds of tons of humanitarian supplies into the Gaza strip:

The Israeli Foreign Ministry, meanwhile, announced on Twitter that Israel has sent into Gaza more than 4 million liters of diesel for the power station, 3 million liters of fuel and 800,000 liters of benzene for transportation, and 1.6 tons of gas for domestic use during the conflict. Forty-three trucks “carrying over 750 tons of food, medicine & supplies” entered Gaza Wednesday from Israel, the ministry said. It provided information on how people can donate humanitarian supplies, and a contact at the Palestinian Customs Agency.


A highly ineffective "genocide," no? Fuel is desperately needed in Gaza, as Israeli attacks took out the region's lone power plant, and Hamas rockets have knocked out a number of the strip's electricity lines into Israel. (That's right, Israel provides electricity to Gaza). As a three-day ceasefire begins, the world prays that a more lasting peace might be achieved. One non-negotiable principle for Israeli Prime Minister Benjamin Netanyahu entering the talks is his country's right to eradicate Hamas' so-called terror tunnels. The terrorist group allegedly uses international aid and child labor to construct secret underground passageways that burrow under the border, allowing their fighters to infiltrate Israel. The tunnels have been used in several lethal attacks during the current conflict; a separate murder and kidnapping spree was detected and neutralized by Israeli forces. Captured Hamas fighters have also reportedly revealed plans for a massacre scheduled for an upcoming Jewish high holy day, in which the perpetrators were to enter Israel via the tunnel network. A different NBC correspondent filed a report on last night's national telecast that gave viewers an extraordinary look inside one of the passages, and a glimpse into the fear the tunnels instills in ordinary Israelis. Captivating:

This terrorist threat is real, terrifying and intolerable. Astoundingly, the leader of a "human rights" organization opined this week that Hamas' use of these tunnels is justified as an avenue for killing IDF soldiers. This gentleman evidently hasn't studied the rules of war very carefully, which stipulate the difference between lawful and unlawful combatants -- such as uniformed military troops and terrorists, respectively. Public polling shows that Israelis are overwhelmingly opposed to a ceasefire at this stage in the fight. The next 72 hours will be scrutinized very carefully, as will any agreement that may emerge from the Cairo talks.