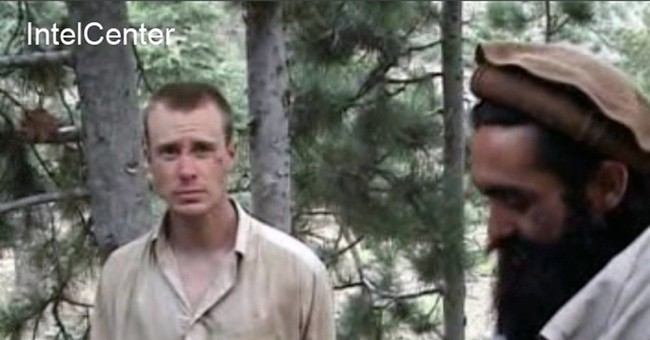 Let's begin with the indisputably good news: Army Sgt. Bowe Bergdahl, who has been held captive by the Taliban since 2009, is coming home. Upon his release, Bergdahl reportedly asked his rescuers if they were US special forces, bursting into tears after they confirmed that they were. His family is obviously elated. Their protracted, unimaginable ordeal is finally over. But this good news comes at an extremely high price. The Daily Beast's Eli Lake and Josh Rogin report:


The five Guantanamo detainees released by the Obama administration in exchange for America’s last prisoner of war in Afghanistan, Sgt. Bowe Bergdahl, are bad guys. They are top Taliban commanders the group has tried to free for more than a decade. According to a 2008 Pentagon dossier on Guantanamo Bay inmates, all five men released were considered to be a high risk to launch attacks against the United States and its allies if they were liberated. The exchange shows that the Obama administration was willing to pay a steep price, indeed, for Bergdahl’s freedom. The administration says they will be transferred to Qatar, which played a key role in the negotiations.


Writing at the Weekly Standard, Thomas Joscelyn characterizes the released terrorists as among the most dangerous Al Qaeda-affiliated Taliban commanders in US custody:


There are good reasons why the Taliban has long wanted the five freed from Gitmo. All five are among the Taliban’s top commanders in U.S. custody and are still revered in jihadist circles. Two of the five have been wanted by the UN for war crimes. And because of their prowess, Joint Task Force-Guantanamo (JTF-GTMO) deemed all five of them “high” risks to the U.S. and its allies. The Obama administration wants to convince the Taliban to abandon its longstanding alliance with al Qaeda. But these men contributed to the formation of that relationship in the first place. All five had close ties to al Qaeda well before the 9/11 attacks. Therefore, it is difficult to see how their freedom would help the Obama administration achieve one of its principal goals for the hoped-for talks.


The Taliban has been seeking the release of these hardcore jihadists for years, and now they've gotten exactly what they wanted:


A few thoughts: One can simultaneously be both overjoyed for the Bergdahl family and deeply concerned about the release of these five men, who are now headed to Qatar. The Obama administration says security measures have been enacted to ensure that they will not return to the battlefield. Perhaps they'll soon find themselves on the wrong side of a US drone. Nevertheless, Joscelyn notes the high recidivism rate among ex-Gitmo detainees, at least one of whom is alleged to have participated in the Benghazi attacks. More alarming is the incentive structure this erects for terrorist organizations. The US has a longstanding, bipartisan policy against negotiating with terrorists. In this case, the Obama administration traded several high-level terrorists for one US soldier. The ranking Republicans on the House and Senate Armed Services Committees make an obvious and worrisome point:

Like all Americans, we celebrate the release of Sergeant Berghdal from terrorist captivity. When one of our own comes home to us, we all rejoice. We are relieved that the ordeal and sacrifice of the Bergdahl family has come to a happy conclusion. In the days ahead however, we must carefully examine the means by which we secured his freedom. America has maintained a prohibition on negotiating with terrorists for good reason. Trading five senior Taliban leaders from detention in Guantanamo Bay for Berghdal’s release may have consequences for the rest of our forces and all Americans. Our terrorist adversaries now have a strong incentive to capture Americans. That incentive will put our forces in Afghanistan and around the world at even greater risk.


Rep. McKeon and Sen. Inhofe also state that the Obama administration totally disregarded a law requiring them to notify Congress of any Guantanamo detainee transfers at least 30 days in advance. (In the past, Congress had the power to block such transfers; they relinquished that power in the 2014 National Defense Authorization Act). Another unpleasant wrinkle to this story are the allegations that Sgt. Bergdahl deserted his unit before being captured by the enemy. Michelle Malkin wrote about those rumors in 2009, with CBS News following the trail through 2012, and again earlier this year. The evidence seems compelling. Those issues will have to be sorted out in due time. For now, we can only hope and pray that this young man is healthy, and that he can find some peace in being reunited with his family. In the meantime, questions abound: Has the president's decision undermined our no-negotiations-with-terrorists posture in a lasting way? How does the government intend to follow through on its assurance that the freed Taliban commanders cannot pose a threat to the United States? How does this swap -- which acceded to an evil group's core demand -- not incentivize similar groups to capture more Americans and demand concessions for their release? On what grounds did the White House flout the 30-day notification legal requirement? Laws aren't suggestions, in spite of this president's repeated actions. I'll leave you with the president announcing the news in the Rose Garden, flanked by Bergdahl's long-suffering parents:


Leaving no man behind is a worthy and honorable American military ideal. But it's reasonable to worry that this Faustian bargain place even more of our countrymen in danger.