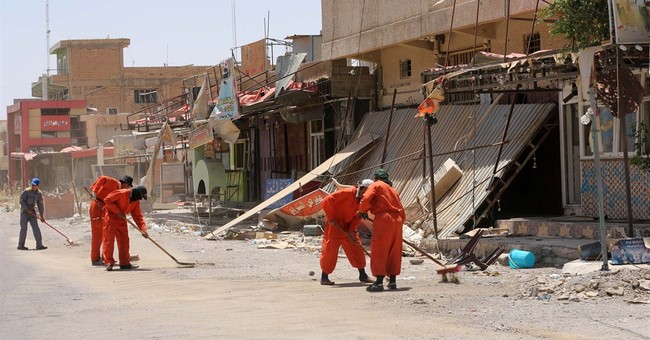 Pray for these lost souls:

An ISIS video released Tuesday showed the jihadis murdering 16 men by drowning them in a cage, decapitating them with explosives and firing a rocket-propelled grenade into a car.

The video, apparently shot in Iraq's Nineveh province, was one of the most brutal yet in a series released by the jihadis of killings of opponents in areas under ISIS control. ISIS has executed hundreds of people by gunfire, dozens by beheading, stoned some to death, thrown others from buildings and burned a captured Jordanian pilot alive.

Click through to read more about just how gruesomely these individuals were killed (I will not, however, link to the video), all of whom were presumably executed to send a message. And that message was clear: oppose us on the battlefield, and we’ll kill you in the most heinous and terrifying ways possible. And yet, it wouldn’t surprise me if these so-called ‘spies’ (which is what ISIS designated them, according to the Agence France Presse) were merely civilians. ISIS, after all, does not differentiate between civilians and military personnel when they commit atrocities.

ISIS has already committed countless unspeakable acts on Yazidi and Christian girls and women in Iraq, but the terrorist army may have reached a new low with a twisted new contest in which female slaves captured in war are given away as "prizes" to fighters who show the have mastered the Koran.

The shocking practice of giving away human beings as prizes, called "sibya," was organized by the Da'wa and Mosques Department in Al-Baraka province in Syria in honor of the beginning of the holy month of Ramadan and was announced June 19 on ISIS Twitter accounts, according to the Middle East Media Research Institute and the Clarion Project, two independent research institutes that track social media accounts linked to terrorist groups.

That is to say, as a reward for demonstrating scholarly understanding of the Koran, ISIS fighters will now be “rewarded” with the unthinkable: innocent women and girls. That shocks the soul to read in print, and our hearts therefore go out to every victim who is currently being sexually exploited and abused. This kind of barbarism is a game to ISIS, it seems, and perhaps a recruiting tool as well.

Hopefully, then, these unholy savages will someday be brought to justice. But it appears ISIS’ day of reckoning is probably a long way off.