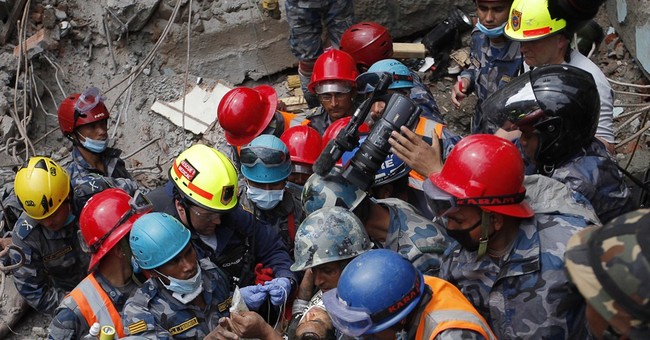 A 7.8-magnitude earthquake struck the nation of Nepal last weekend, killing four Americans and thousands of others. To date, officials believe nearly 6,000 people have died in what has already been established as the most powerful earthquake to hit the region since 1932. Unfortunately, however, as with all natural disasters, the death toll continues to rise:

Up to 15,000 people may have died in the devastating earthquake that struck Nepal over the weekend, the country's army chief told NBC News in an exclusive interview on Thursday.

"Our estimates are not looking good. We are thinking that 10,000 to 15,000 may be killed," said Gen. Gaurav Rana, who is leading the nationwide rescue effort.

The government’s response, meanwhile, has been painstakingly slow and sometimes ineffective. Hundreds, in fact, have been protesting — and demanding — action, urging government officials to do more to bring information and aid to those in need:

Over 200 Nepalis protested outside parliament in the capital Kathmandu, demanding the government increase the number of buses going to the interior hills and improve distribution of aid.

"I haven't been able to contact my family members in the village," said Kayant Panday, one of the protesters, who said he woke up at 4 a.m. to get a bus to a badly hit area but was not able to get one. "There is no way I can get information whether they are dead or alive."

The government has yet to fully assess the devastation wrought by Saturday's 7.8 magnitude quake, unable to reach many mountainous areas despite aid supplies and personnel pouring in from around the world.

Aid is coming from elsewhere, however. The Wall Street Journal reports:

International aid began to pour in Monday, said Nepalese officials at the airport. Burlnarsingh Rana, an officer with the national police, said that since then, flights had arrived from the Netherlands, Poland, Turkey, Pakistran, Sri Lanka and Israel.

On Tuesday, two U.S. military cargo planes arrived in Katmandu with American civilian assessment and rescue teams on board. But U.S. officials said that crowding at the airport was hampering the U.S. ability to ramp up its aid.

Despite such global humanitarianism — kudos, by the way, to Israel for leading the way — more must be done. Too many displaced persons lack food, shelter, medical care, and information. And although Nepal's leaders are doing all they can, including taking salary cuts to help with the crisis, the response is frustratingly slow. Meanwhile, those looking to graciously provide financial aid to those in need should be careful, and do some research before donating. Charity fraud is sadly not all that uncommon.