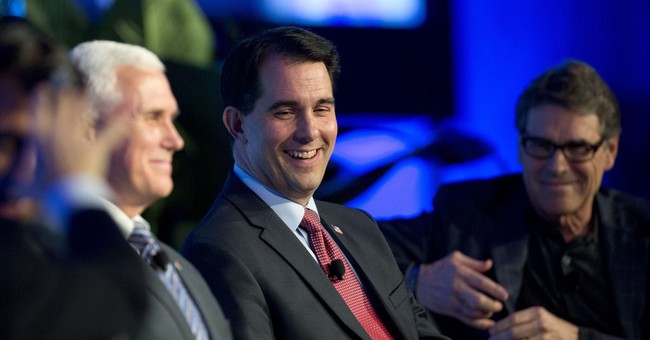 Gov. Scott Walker’s (R-WI) stock is rising. A new Townhall/Gravis Marketing survey shows him eclipsing his closest GOP presidential rival by…14 percentage points in Iowa. To be sure, the sample is rather limited in scope (only 343 self-described Republicans participated) but at this early stage, he's trouncing the competition despite the fact that 15 percent of respondents are still undecided: Interestingly, Walker does especially well with men and therefore "white men." Why? Because some 84 percent of total respondents self-identify as Caucasians: Perhaps Walker’s lead can also be attributed to his enormous name recognition after taking on the unions and winning three times in his home state. Nevertheless, in a Clinton-Walker electoral showdown—that is, if Americans went to the polls today—he would lose the election handily: No Republican hopeful beats Hillary Clinton in a hypothetical head-to-head matchup (although Rand Paul, Mike Huckabee, and Jeb Bush do a little better than Walker against her one-on-one), according to the poll. Bear in mind, however, that the D/R/I sample breakdown is D+7 (37/30/33). Given Party ID turnout rates (R+1) in 2014, however, that seems unfairly skewed in favor of Democrats.

The survey had a margin of error of ± 3% and just under one thousand registered voters participated.