Acting VA Secretary: We Can’t Serve Our Veterans Effectively Unless You Give Us Another $17 Billion... 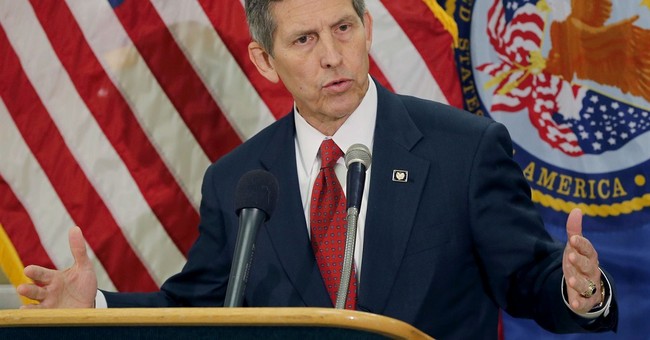 The acting head of the Department of Veterans Affairs (VA) said in sworn testimony yesterday that the federal agency will need almost $20 billion to process its backlog claims and “properly” care for our veterans. And since we’re sending US soldiers at war pink slips because of "budget cuts," that shouldn’t be a problem, right?

Acting VA Secretary Sloan Gibson told the Senate Veterans Affairs Committee that the $17.6 billion request would only last through the 2017 fiscal year.

But to keep ahead of the rising population of veterans needing VA care, even more money will be needed in the future, Mr. Gibson said.

The almost $18 billion we’re talking about here is about 2 and a half times the amount spent on the entire 2012 election, which liberals decry as an astronomical amount and an unconscionable stain on our process. It’s the amount at which Uber was valued in its public offering, which many called insane, despite its being an actual successful company with global aspirations that actually serves people a superior product. And, it’s slightly more than it would take you to buy all of the NBA. All its franchises.

In other words, it's a ton of money. And yet this request comes at a time when reports are surfacing that executives at the agency were receiving performance-based bonuses. In some cases, too, these so-called “executives” were almost certainly rollin’ in the dough at the expense of those whom they were allegedly serving and caring for. As the LA Times reported at the time:

An “outlandish bonus culture" pervades the Department of Veterans Affairs, with no senior manager receiving less than a fully satisfactory performance review last year despite problems, including long waits for patient care and cost overruns for construction projects, the chairman of the House Veterans' Affairs Committee said at a Capitol Hill hearing Friday.

The VA paid out more than $2.8 million in "performance awards" in the last fiscal year to executives, some of whom are now under scrutiny for misrepresenting veterans’ wait times for healthcare.

Translation: Bigwigs at the agency were coming home with bonus pay while veterans died waiting for care. And now the agency wants more money?

On a personal note, out of all the scandals we cover, this one upsets me the most. I’ve never served in the military. But it’s self-evident that those who do -- especially those deployed in war zones and overseas -- take extraordinary risks so people like me (and perhaps people like you) don’t have to. They deserve better. And yet how did we get to this point? How it is, according to a year-long study released by Sen. Tom Coburn’s (R-OK) office last month, more than 1,000 veterans have died over the past ten years from neglect and malfeasance?

History demonstrates that tossing more money at a man-made government problem -- and then washing our collective hands clean of it -- is not a workable solution. The VA needs to be restructured and reformed from within, and that, I trust, can be reasonably accomplished with the ample funding they already receive.